The 13th meetup of the enigma expedition was on the 30th local time, and I missed both of them, and considering recent events, now seems like a good time to do some writing.

We were lucky enough to be at the waypoint in time for sunrise. 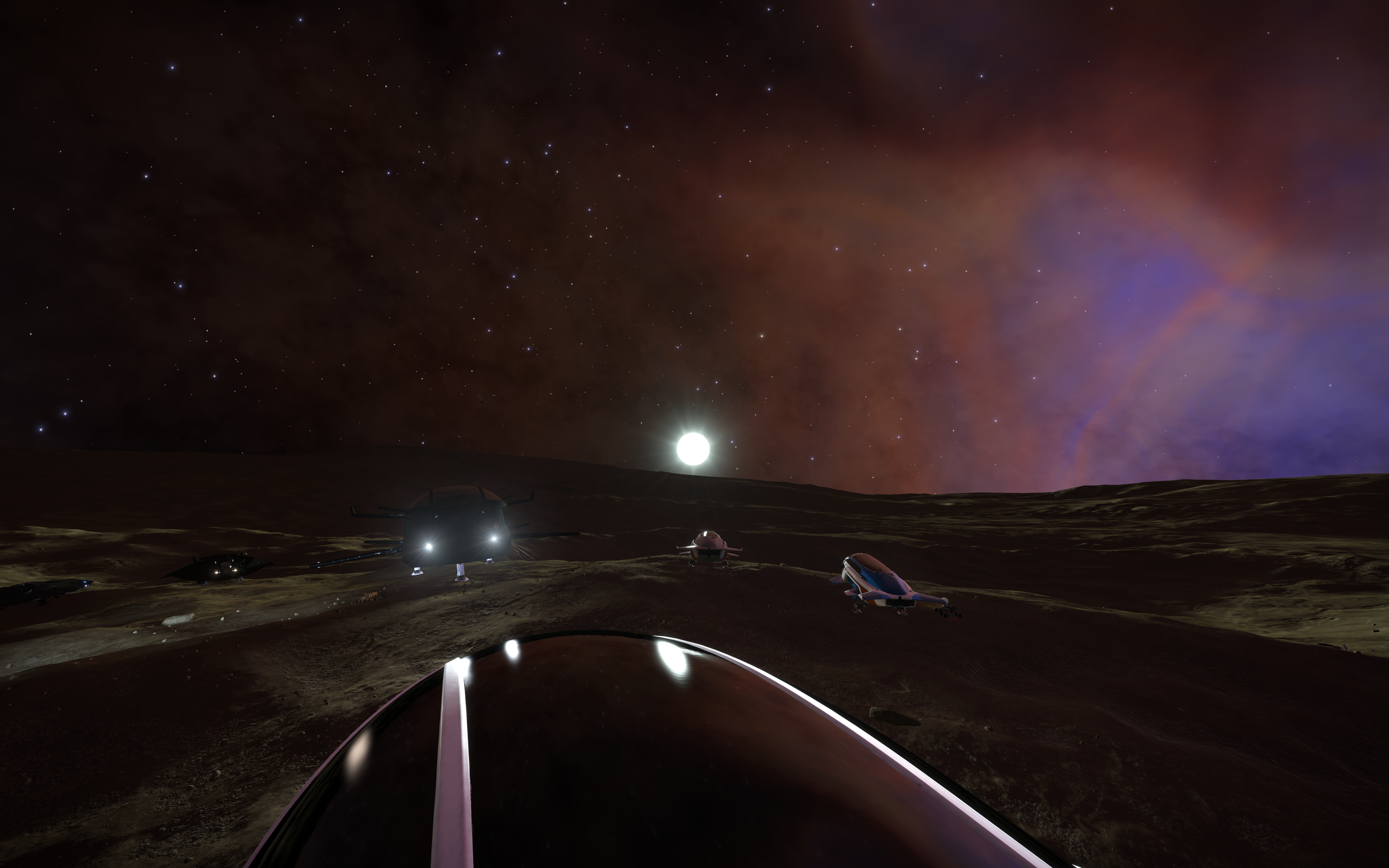 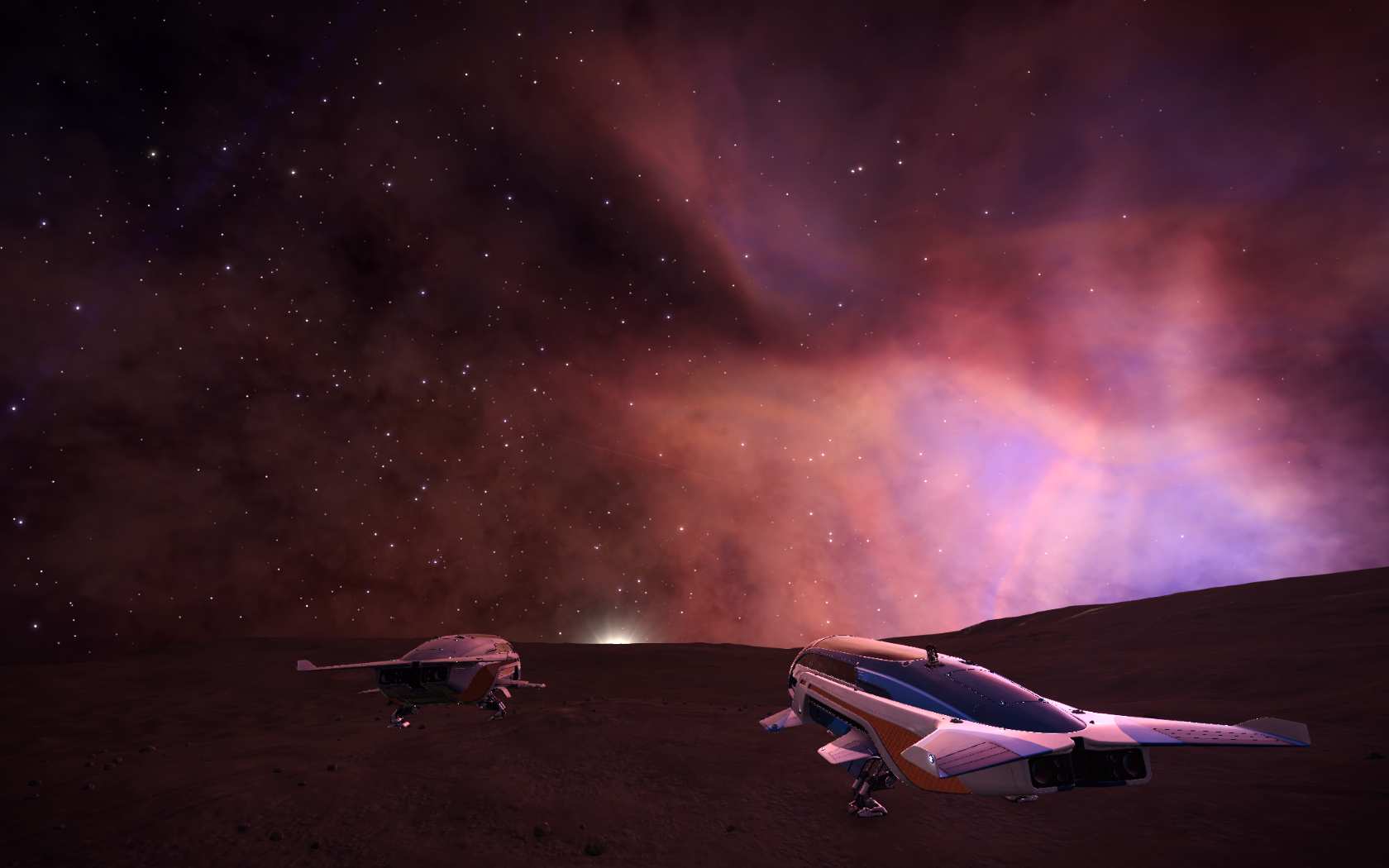 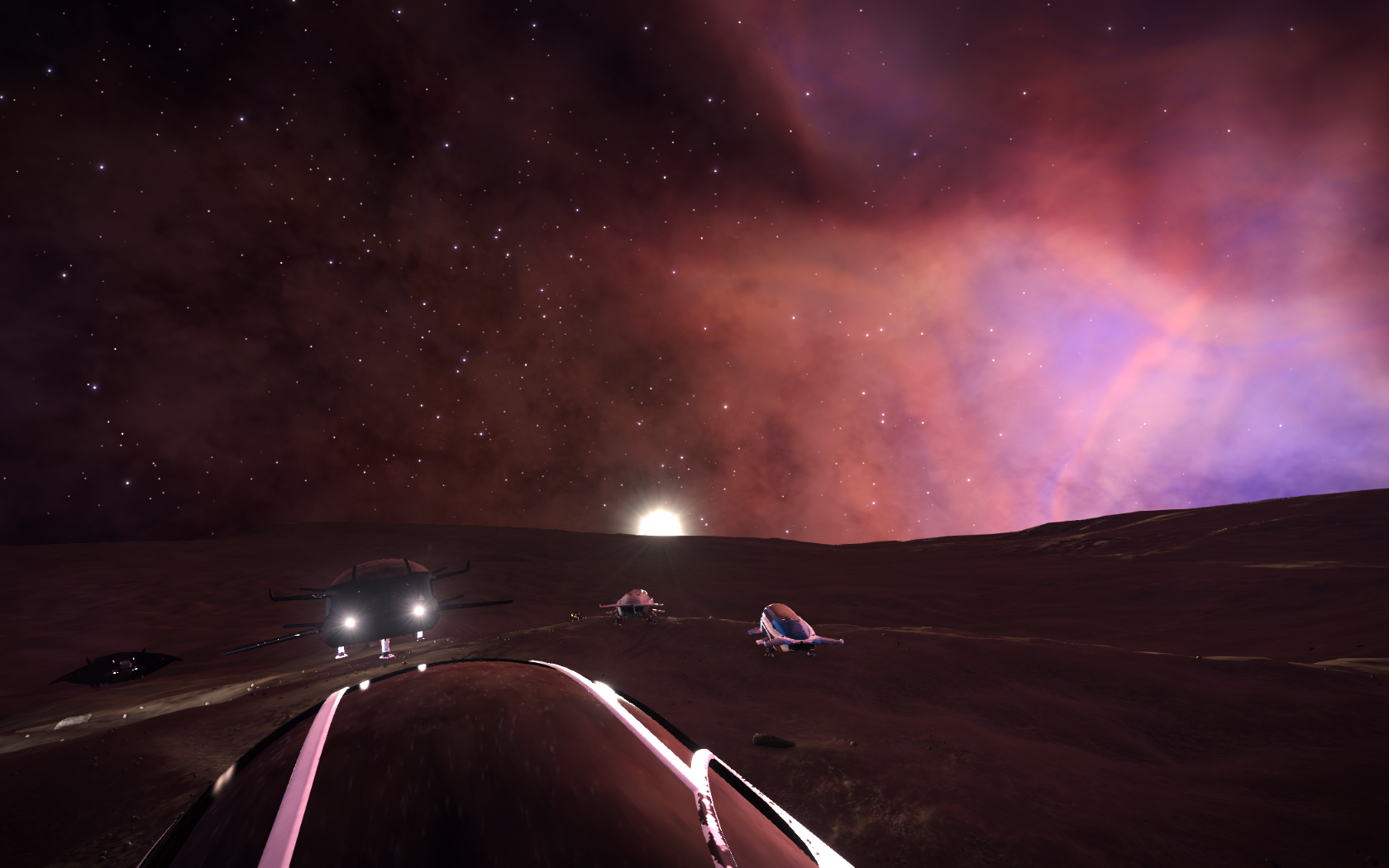 Ran into the usual suspects, and even possibly set a height record in my SRV by being batted into the air by an Orca.

The Eagle Nebula waypoint was at a land base - Eagle’s Landing. 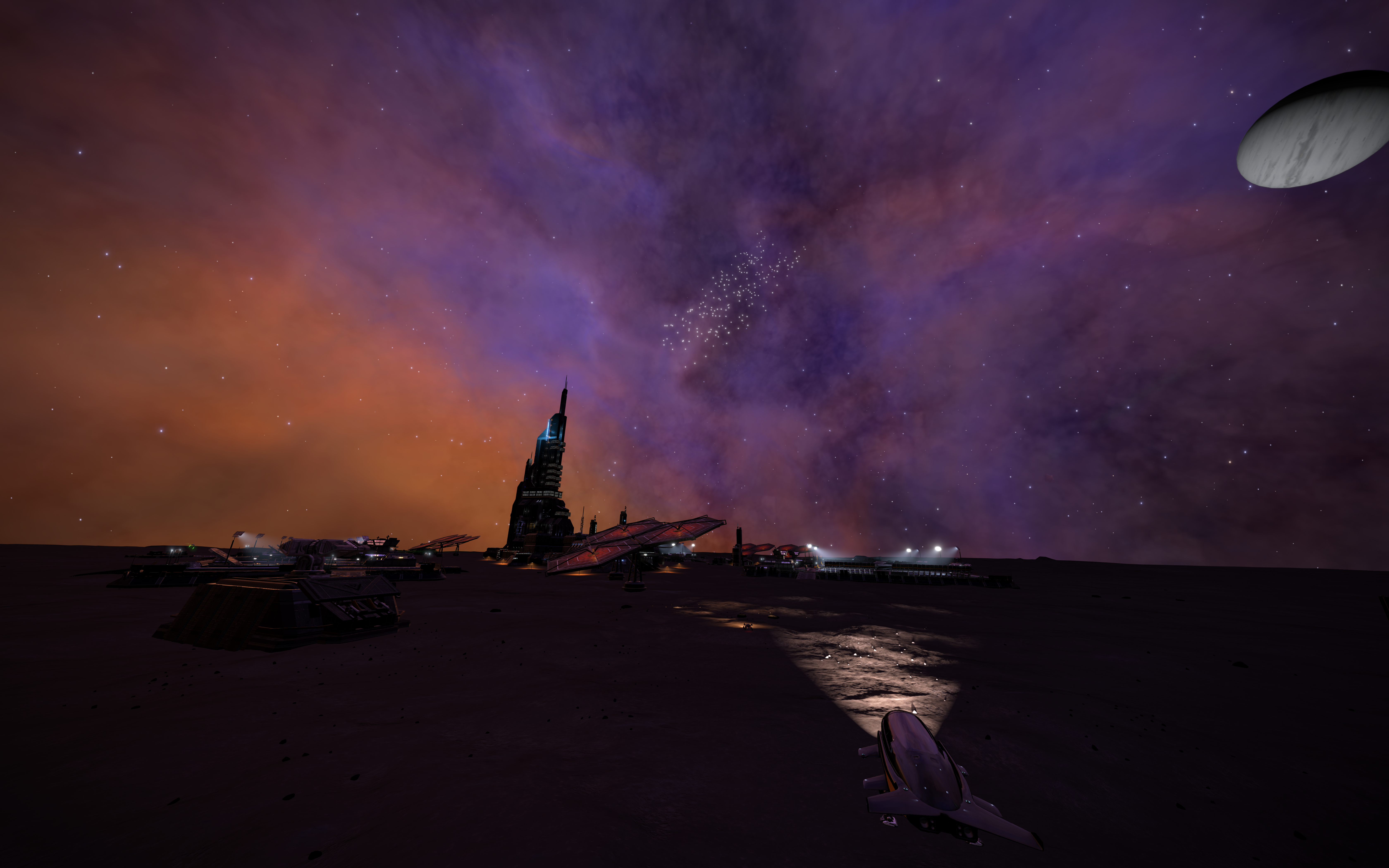 This time, we decided to do some racing.

Nothing particularly interesting, just a station above an earth-like world. No pictures this time.

Waypoint 10 was at one of the Dynasty Expedition sites in the Conflux. You can find out more here. 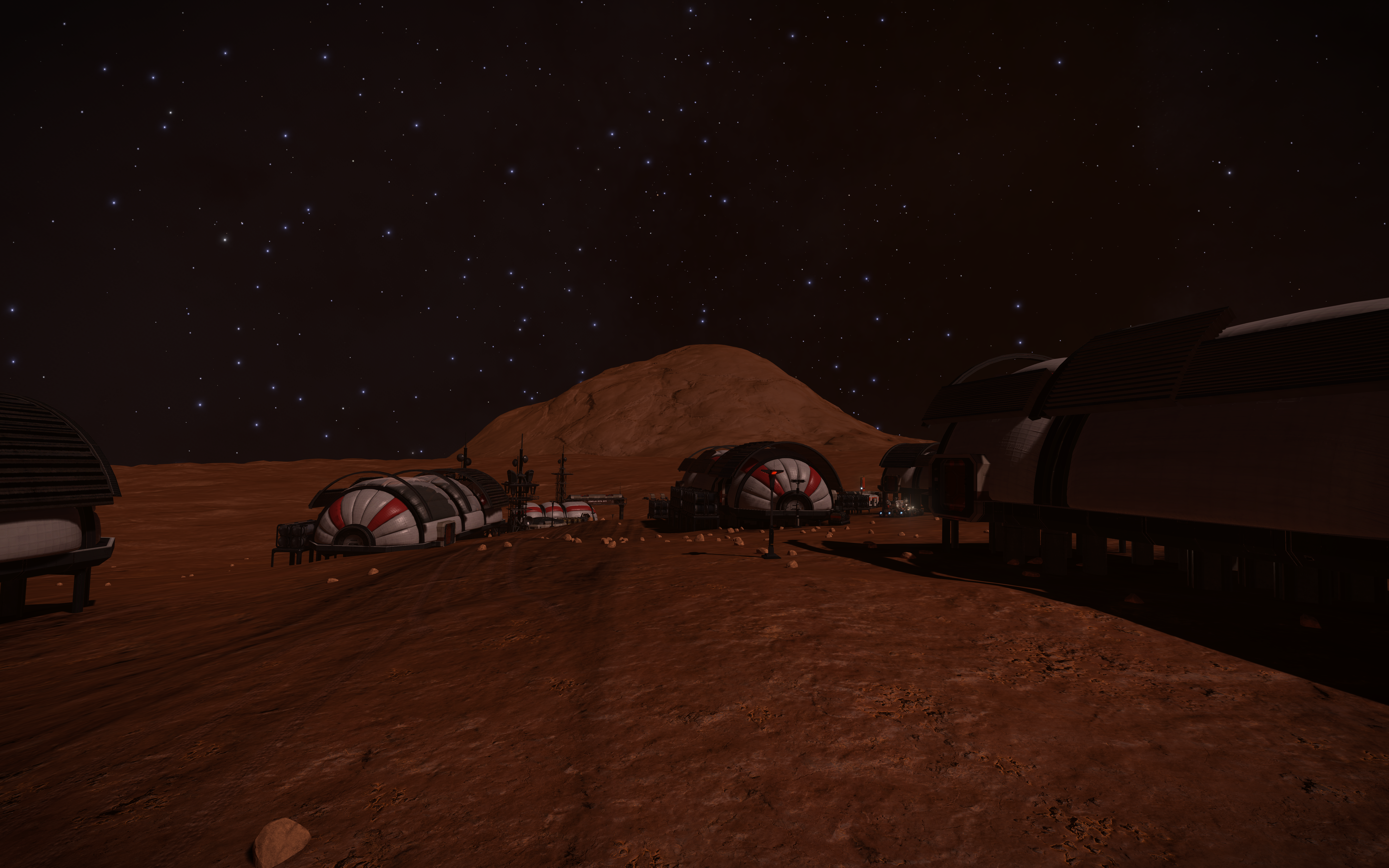 (There was a video, too, but I must’ve screwed up encoding or something. It plays fine in VLC but not so well in Waterfox.)

The Guardians were a technologically advanced humanoid race that colonized an area of the Orion arm before humans mastered interstellar travel. They were a strongly communal society arranged in co-operative city-states. They used a system of monoliths to share information between settlements many light-years apart. The Guardians had a strong spiritual connection to their environment, and carefully managed their impact on the world around them, maintaining a connection to their pack-hunter origins. They were highly adept at genetic manipulation and used this to modify both themselves, and their environment to improve quality of life, or to wage war. Although peaceful for the majority of their history, technological disparity gave rise to two major conflicts. The second of these was an ideological and religious war fought in response to the increasing technological advancements facilitated by artificial intelligence. Sadly the escalating automation of this war destroyed the habitat and majority of the population of the Guardians’ home world. Only now are humans discovering the remains of this once great civilization, and there are many questions left unanswered.

From the Canonn Research page on The Guardians

Waypoint 11 was at what was once a Guardian settlement, and is now abandoned. It’s not known what happened to the Guardian outcasts that didn’t give up technology, but they aren’t here. 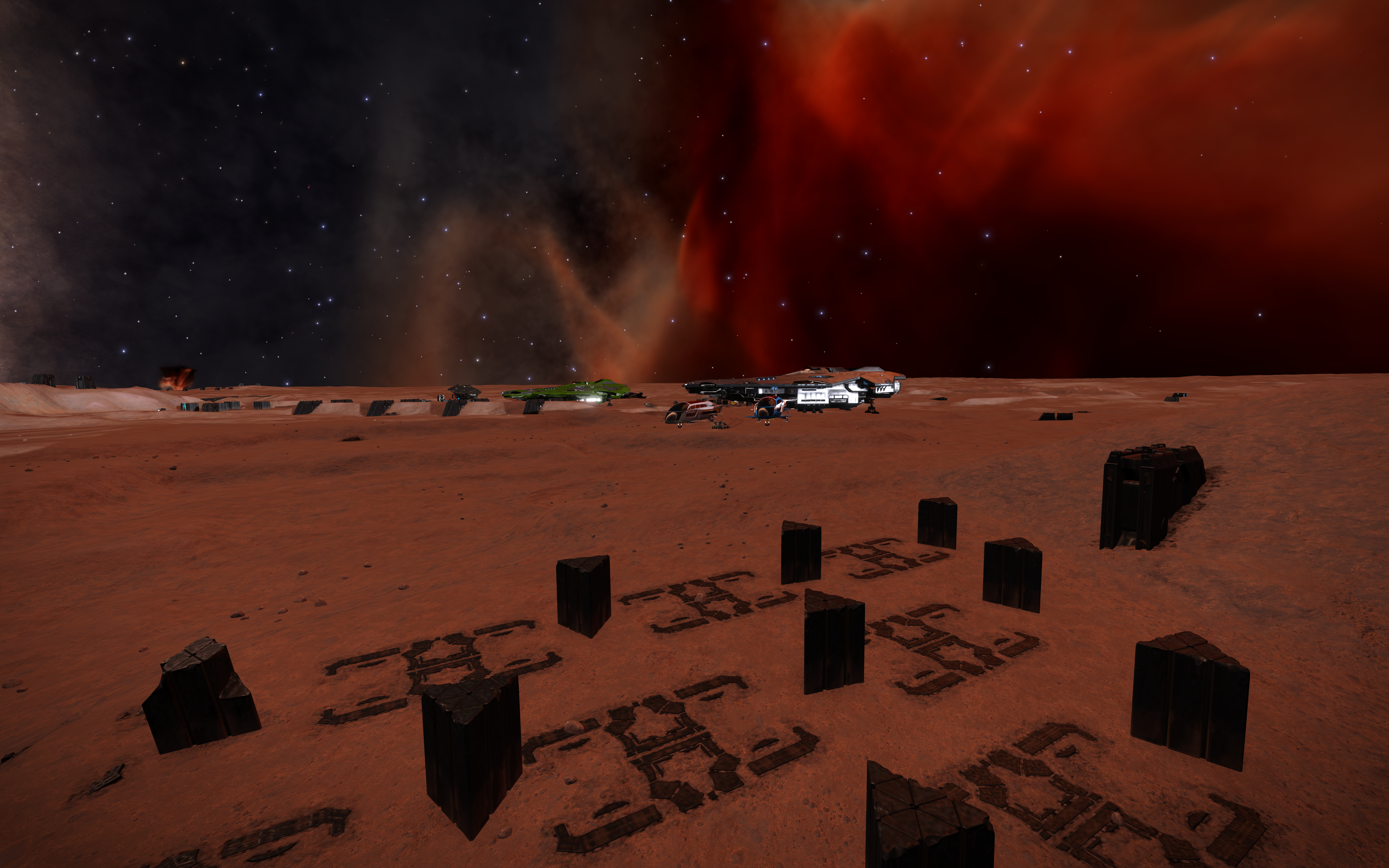 We played SRV soccer - Rocket League is significantly better, but it was fun anyway.

And we did some racing, because who cares that it’s an archeaological site, right?

Following the meetup, CMDRs Pandachu, Noncreative, Seph Iridan and I headed to a nearby brain tree site, as they’re called. I think they look more like raspberries, but I didn’t name them. 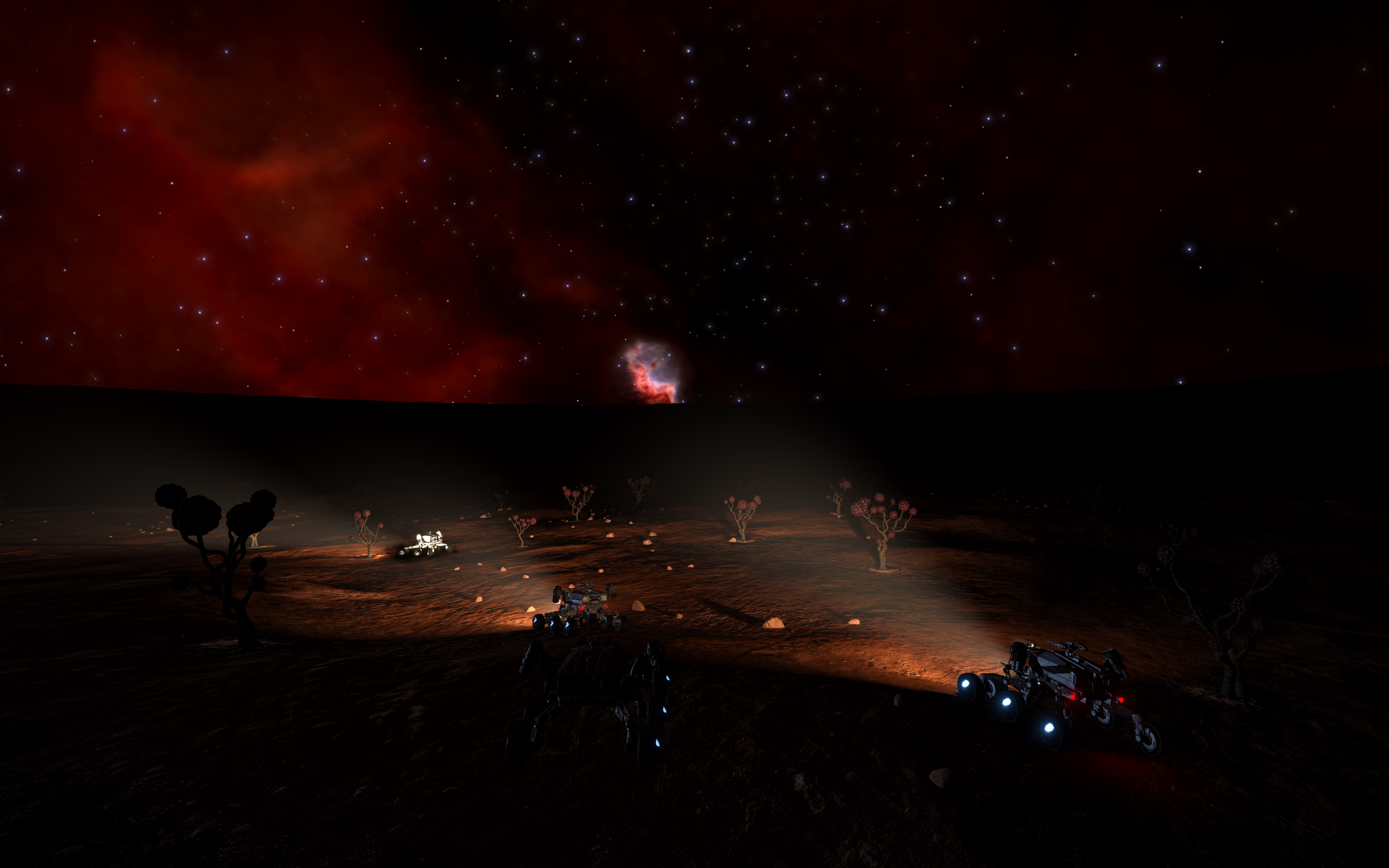 They drop not-insignificant amounts of materials, as it turns out.

The next day, after getting some pictures of the brain trees in better light, I set out to find more Guardian ruins to poke around at. 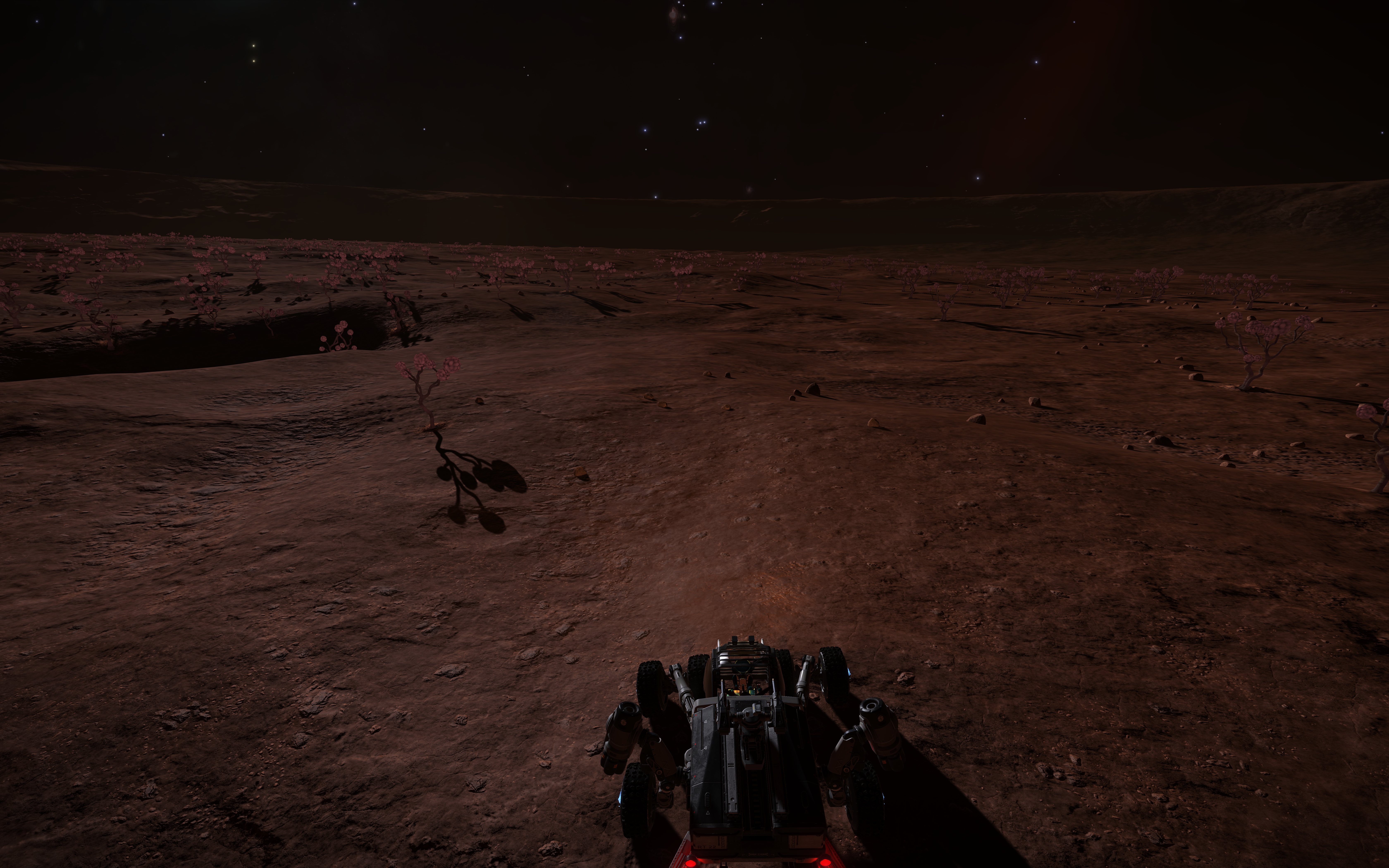 I found a very circular one on a moon very close to a planet. 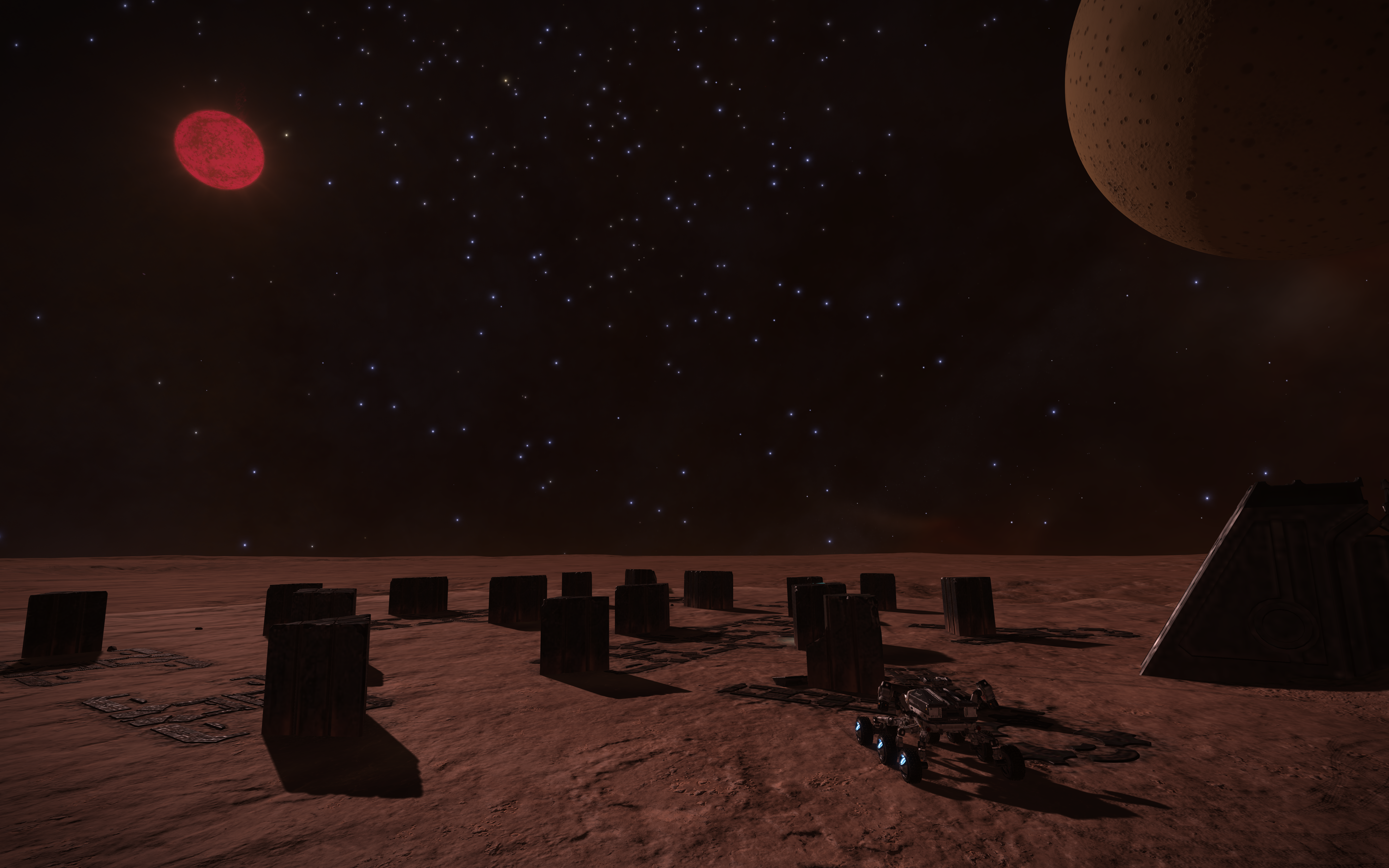 Waypoint 12 was another non-planetary meetup, at a system nicknamed the Crux, for the interesting formation of 3 neutron stars: 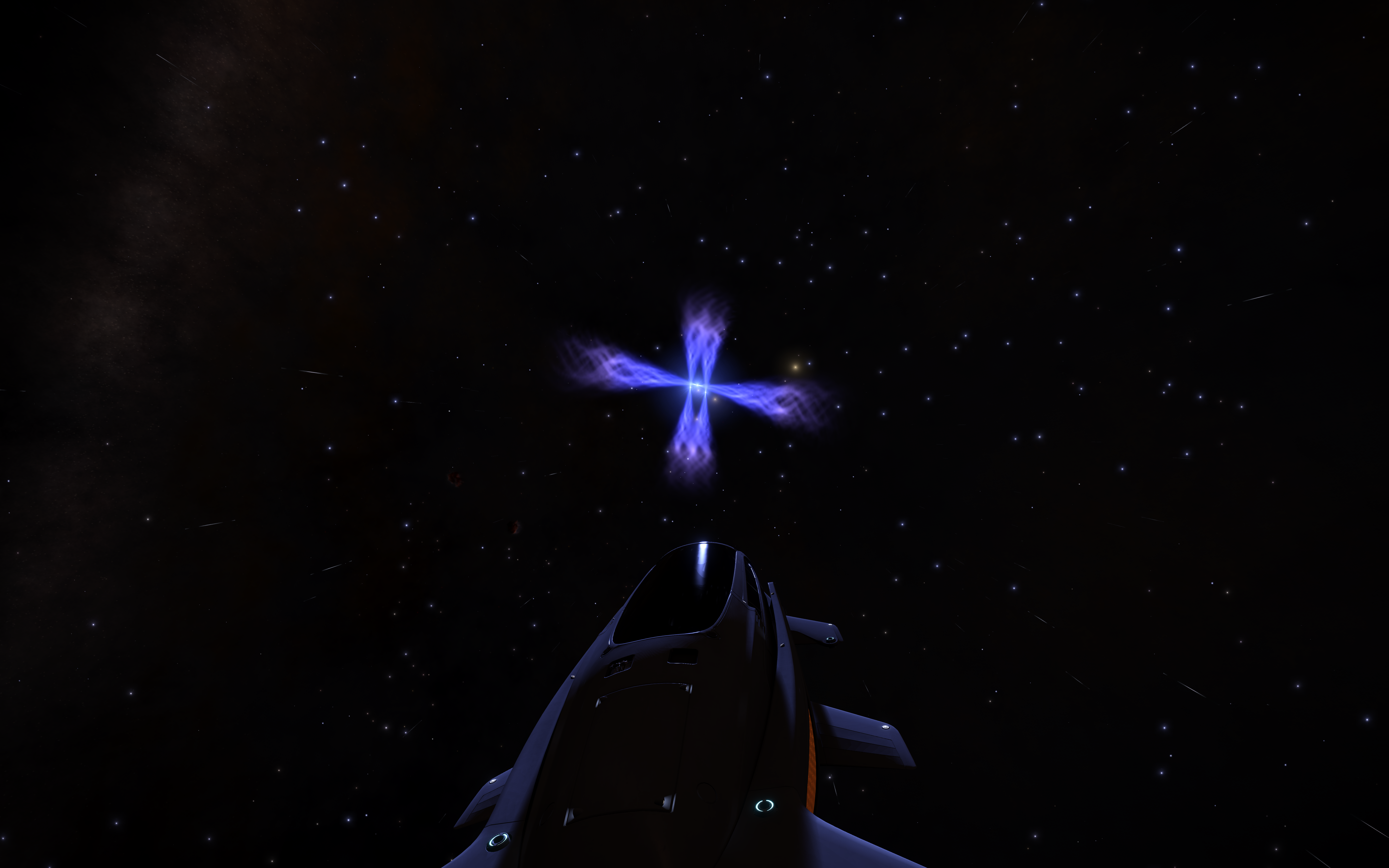 This system contains a Class V gas giant that orbits its white dwarf primary in only 15 minutes, and passes through the jet of the WD! Its orbital distance from the WD is 0.4 ls, so close that it cannot actually be reached using supercruise (the WD drops the ship out of SC about 2 ls out).

I missed the meetup for this one, so all I have is a picture to show for it. 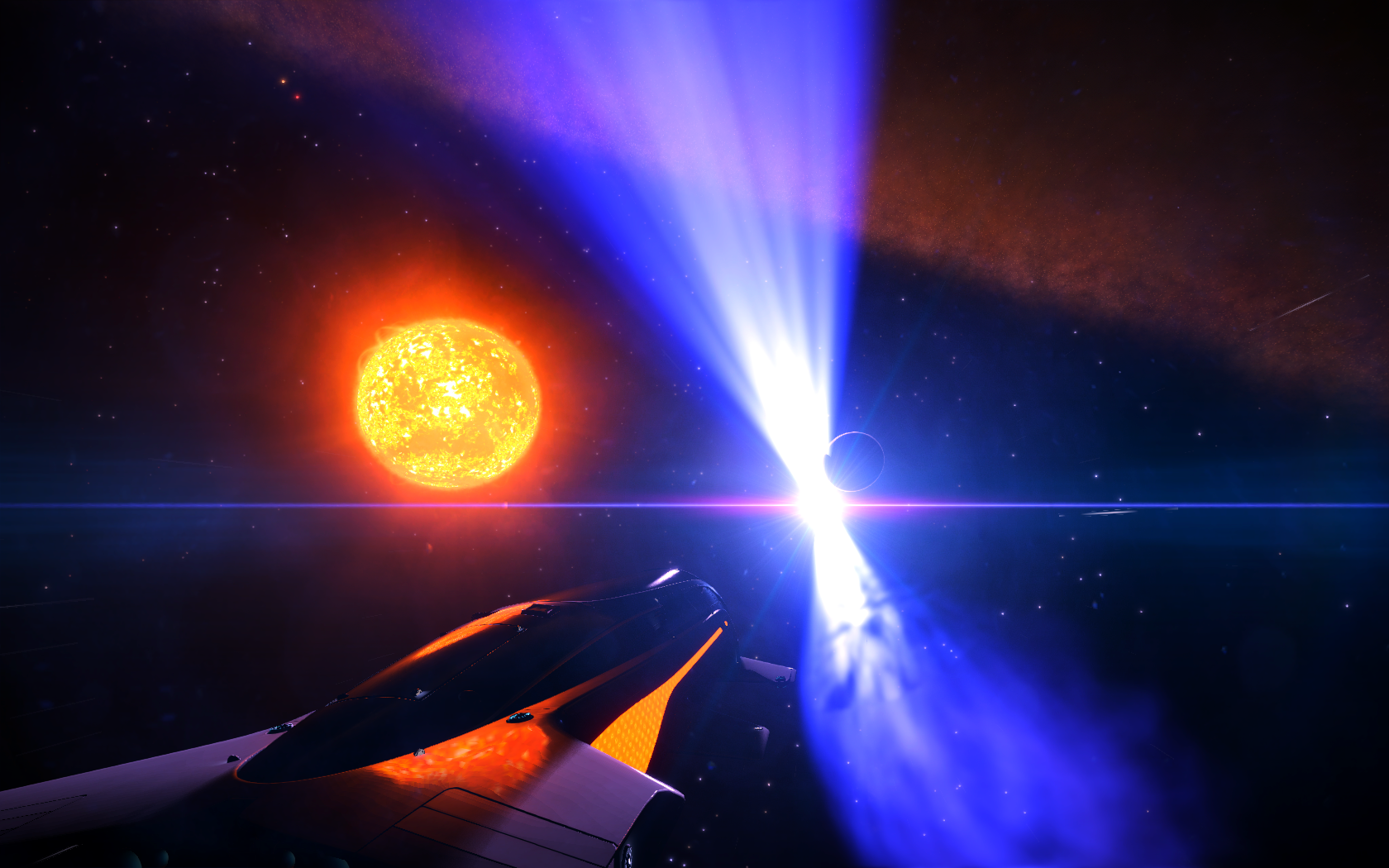 The Dove Enigma megaship, the final destination of the expedition, has been rendered offline by Thargoid Sensors that players have delivered. The only way to fix this is to ship large amounts of meta-alloys from the Maia system in the Pleiades nebula. As such, I’m going to get to Colonia, buy a sidewinder, explode violently, respawn at my Anaconda in the bubble, refit it for cargo, and get to shipping meta-alloys to Colonia. It’s a good thing I have a lot of Babylon 5 to watch.