In the last Elite: Dangerous post I mentioned I was going to be participating in the Enigma Expedition. It’s currently day 6, my Dolphin is landed in the Lagoon Nebula near Thor’s Eye, and here’s some more pretty pictures and videos. 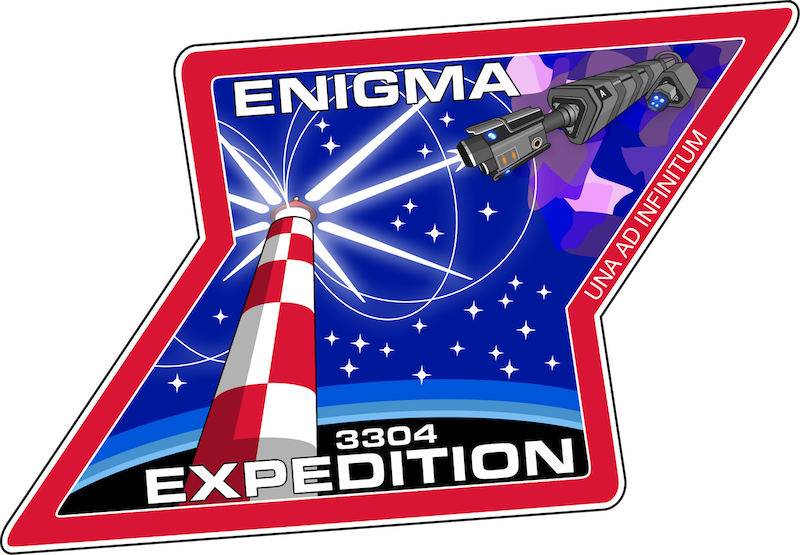 I won’t include all the pictures I took on this page specifically, but you can see more in the gallery

The only primary neutron star in the bubble, and the start of the trip. I didn’t get any interesting pictures, but it would’ve just been a bunch of Anacondas and Asp Explorers sitting in space near a neutron star.

The Helix Nebula is a large planetary nebula located in the constellation Aquarius. It was the destination of one of the early research voyages organized by the First Great Expedition - making it one of the first nebulae to be surveyed by group exploration. 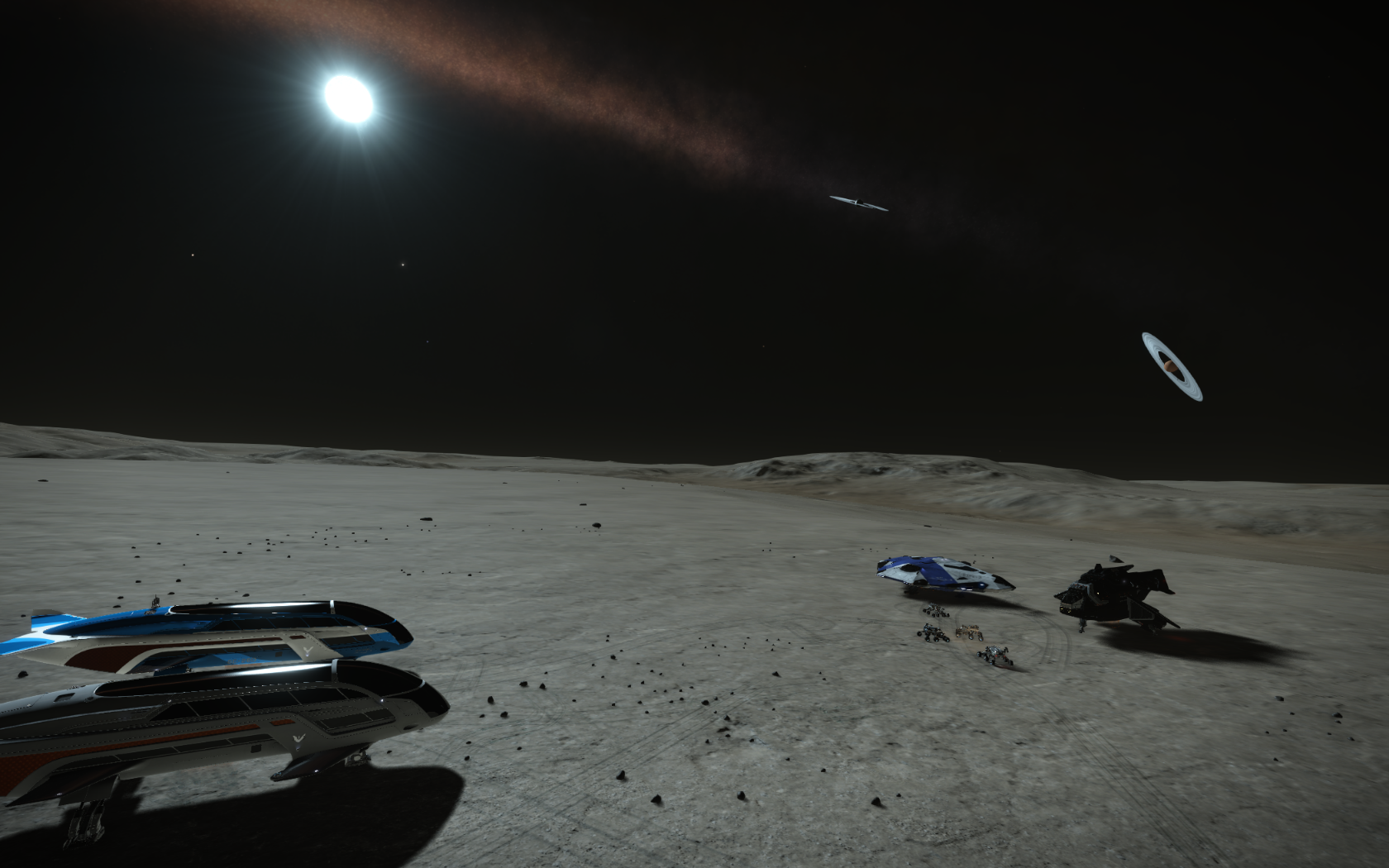 The first waypoint didn’t have a specific landing site, so it was mostly isolated groups of players landing on the surface. I met another explora-Dolphin pilot - CMDR ‘Seph Iridan - there though, who I’ve managed to run into at every waypoint since. 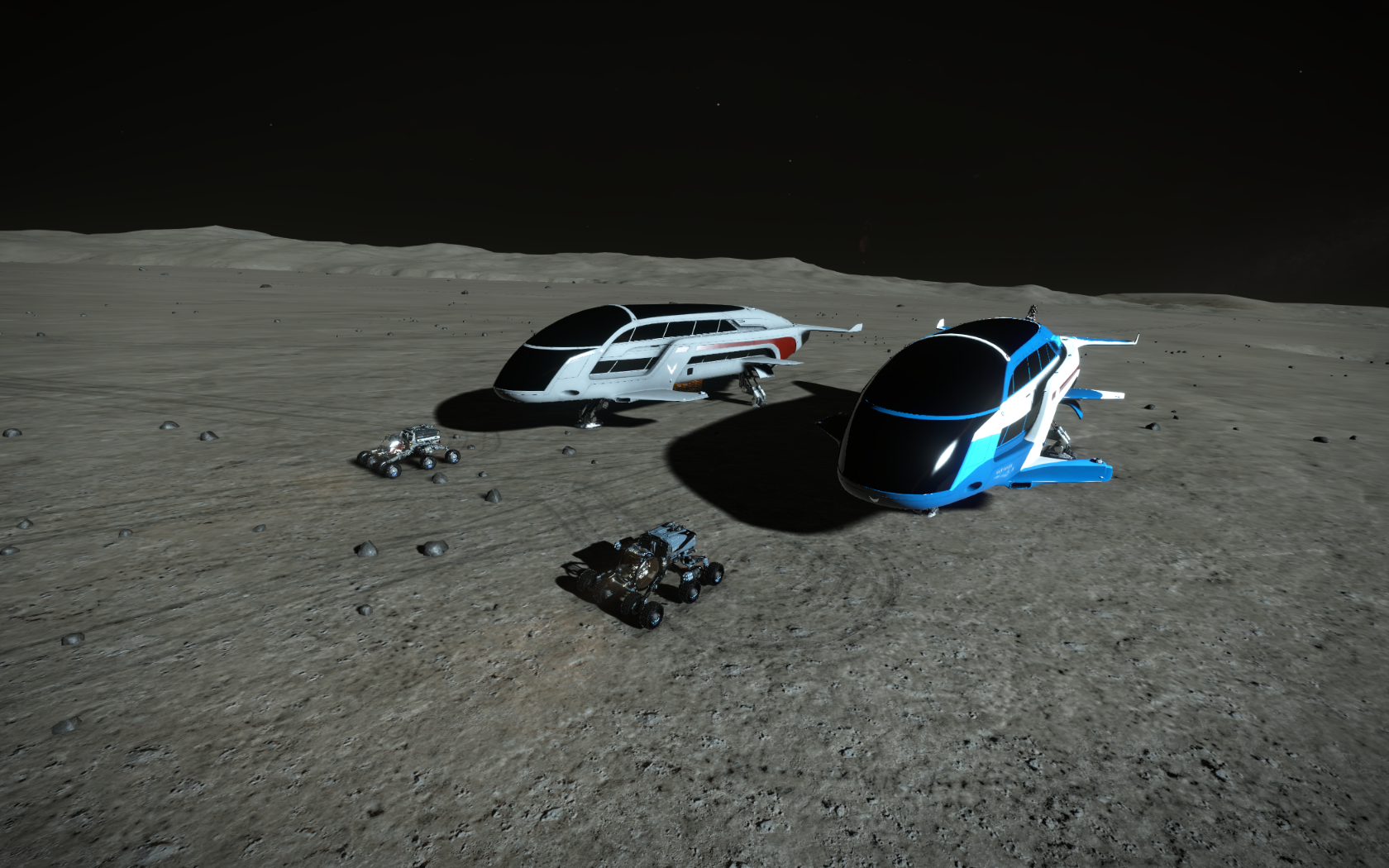 Naturally, as with any gathering of players on a planets' surface, there were SRV-related shenanigans. Mammon has an asteroid station and a few landable planets. The meeting point was on the first moon of the first planet, in a crater. 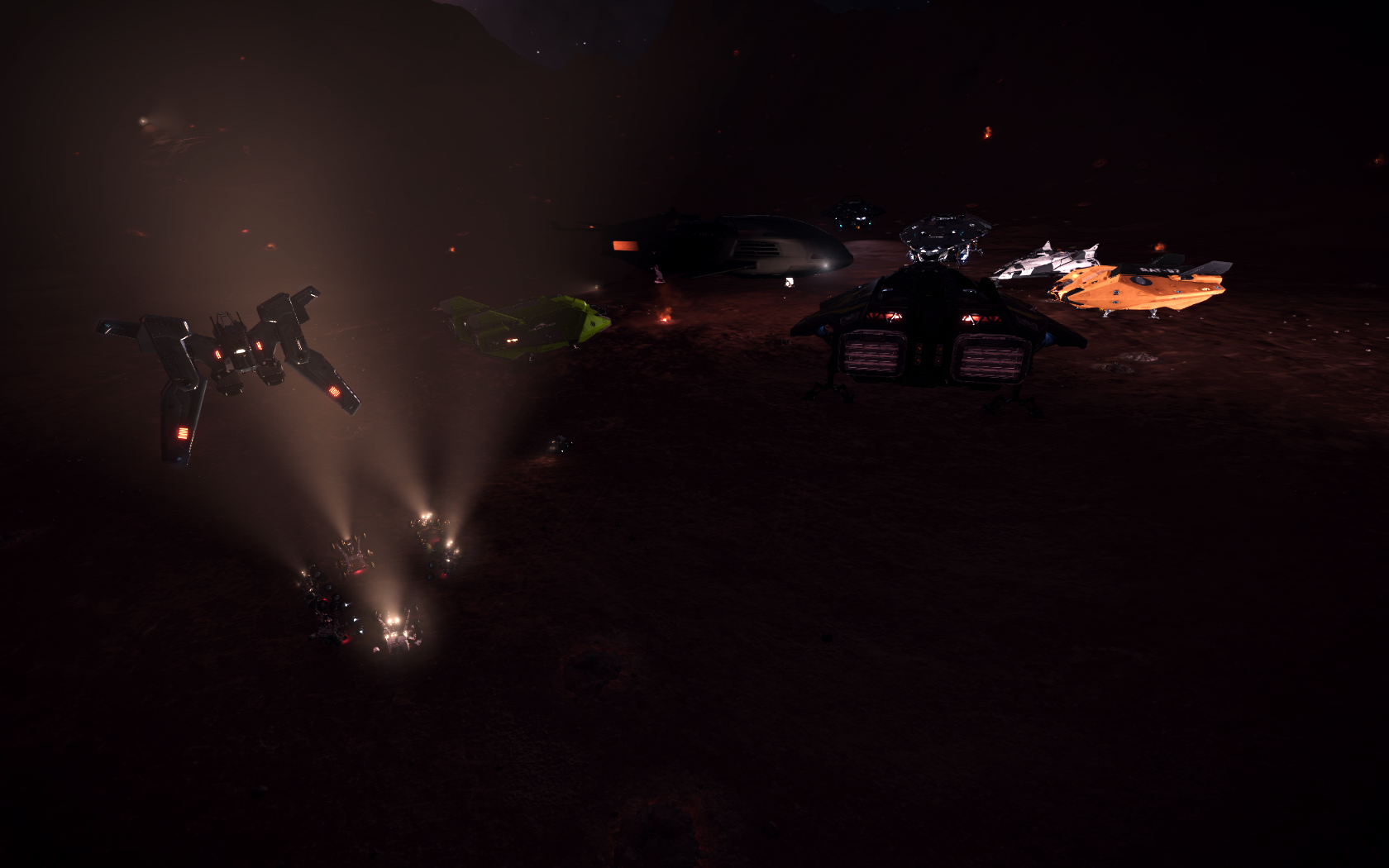 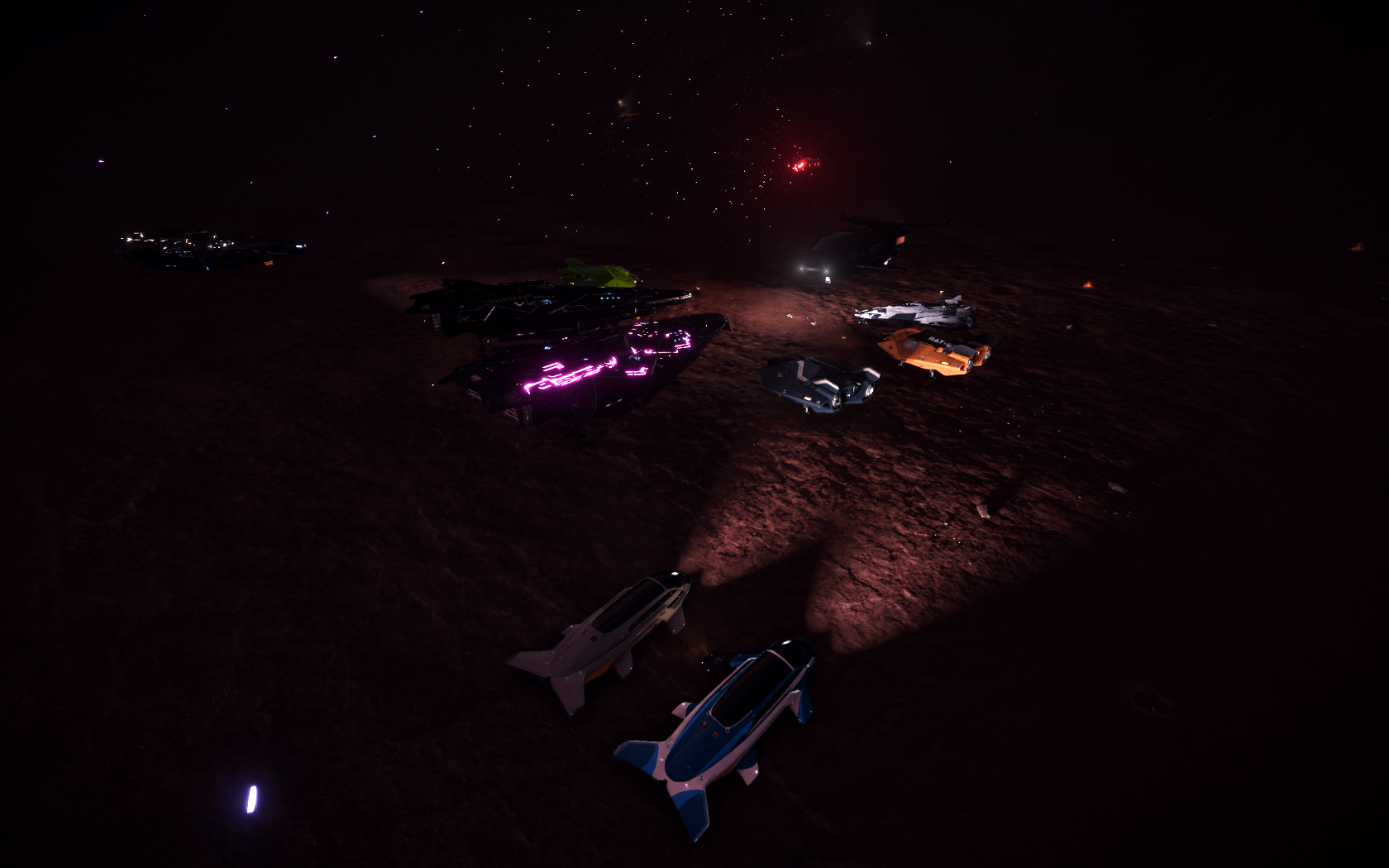 I met up again with my fellow dolphin pilot and more SRV shenanigans occured. 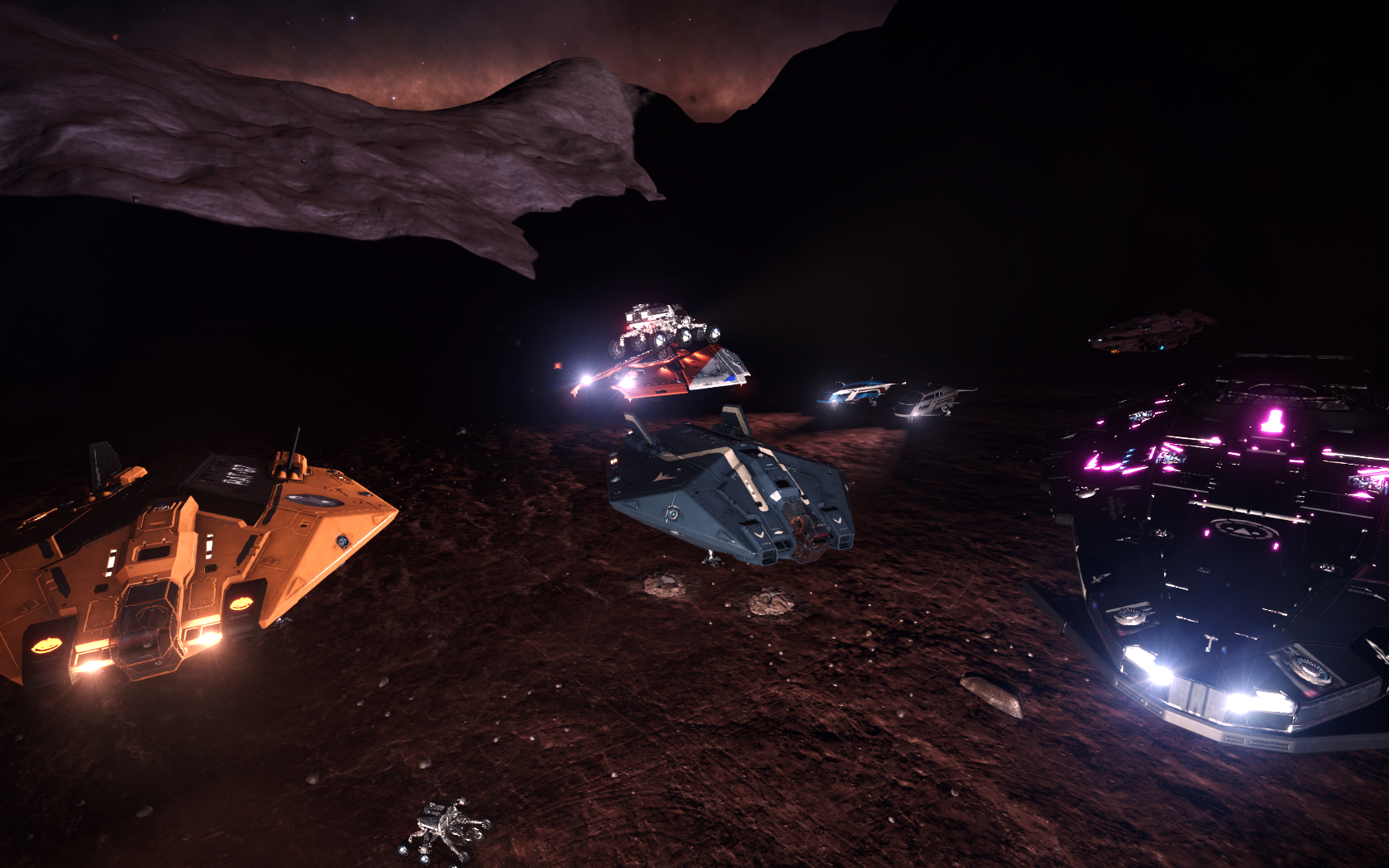 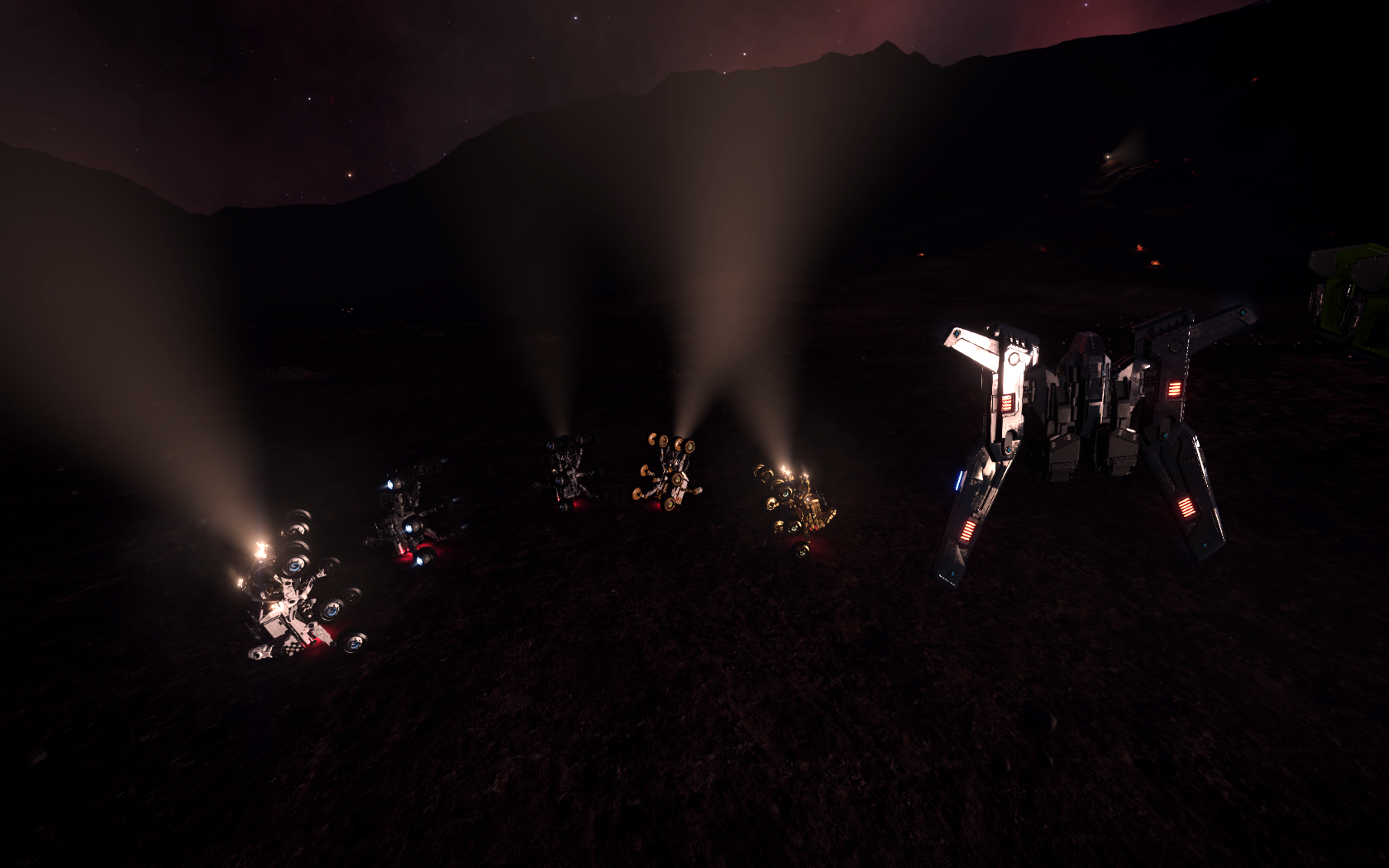 As it turns out, a F63 Condor fighter is quite good at lifting SRVs.

The blue supergiant star is a part of the constellation Sagittarius and visible with the naked eye from Earth. The first planet of the system is marked by a massive impact crater (“Stray Bird’s Nest”, named after the “Straybird”, CMDR Corbin Moran’s Asp who touched down there first) that has left the surface in that area extremely rugged. From within the crater is a very nice view of the primary star and the rings of the planet. Beware that this is a 3.9g world, so be VERY careful with your descent!

Suffice to say that I did not heed that warning and it did not end well for me. 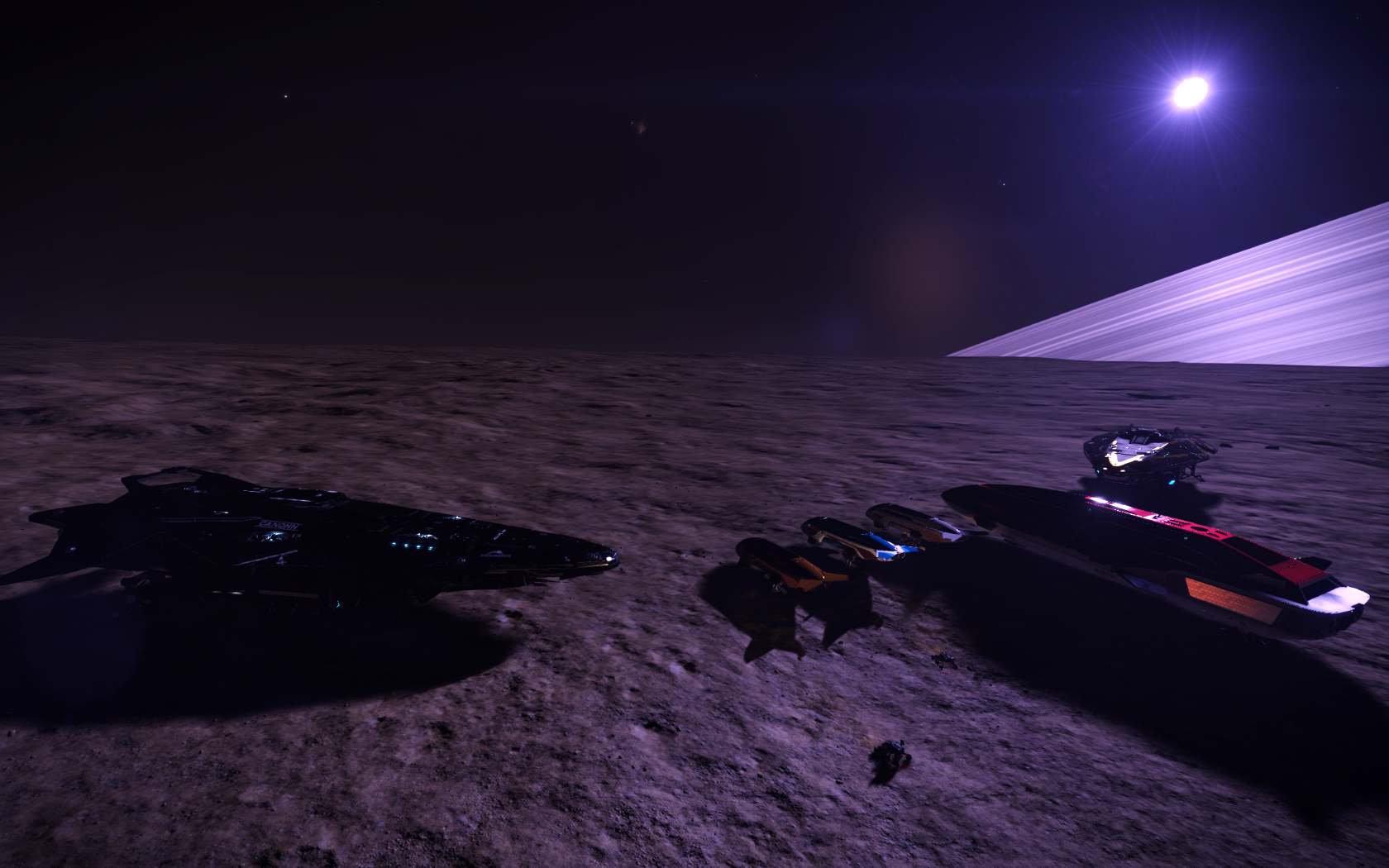 I arrived early but there were, unsurprisingly, already people there. 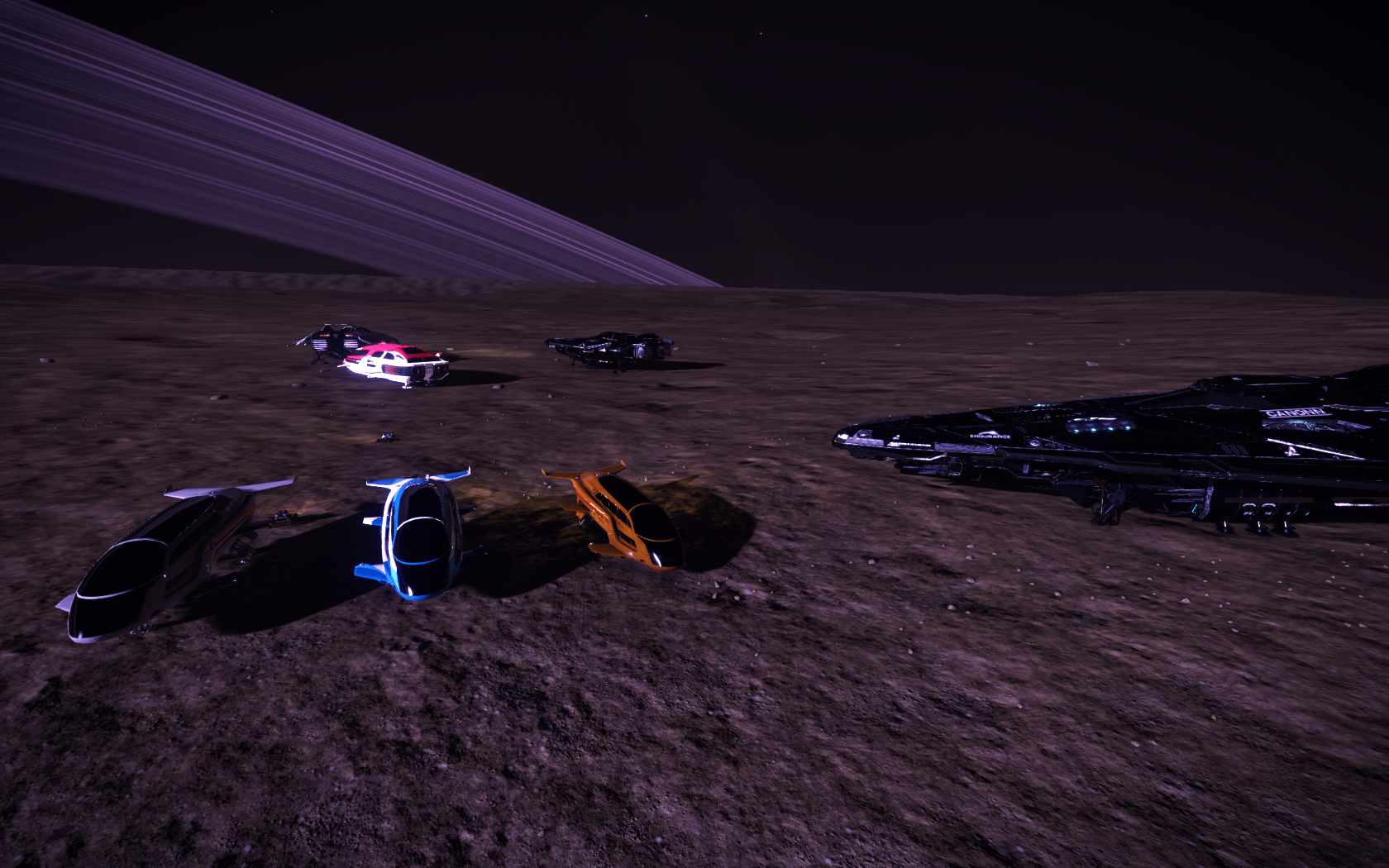 There was a third dolphin pilot there though! I’m surprised the Dolphin isn’t more popular for exploring, it’s cheap and can get good jump distances easily. 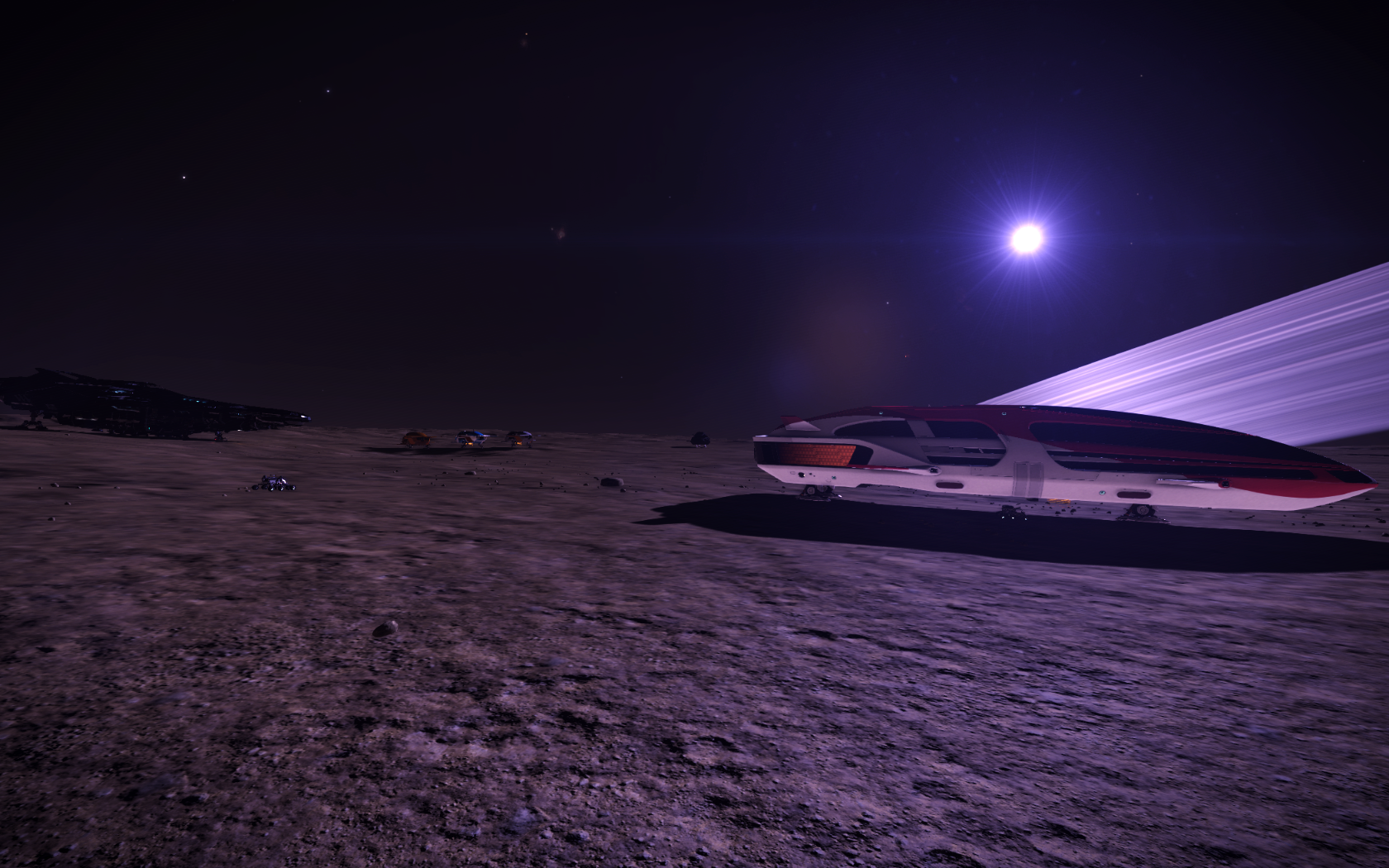 The view of the ring and the sun was very nice.

The bright O-type star HD 175876 has a companion neutron-star with a surprising feature: Extremely large rings. The effective radius of the rings are 12 light seconds, and it has a mass of 5.16 x 1017 kg - slightly greater than Thebe, a small moon of Jupiter. As the neutron star has a radius on the order of 10km, this object has an exceptionally large ring size relative to the central body. These massive metal-rich rings would provide enough material for hundreds of years for any colony. 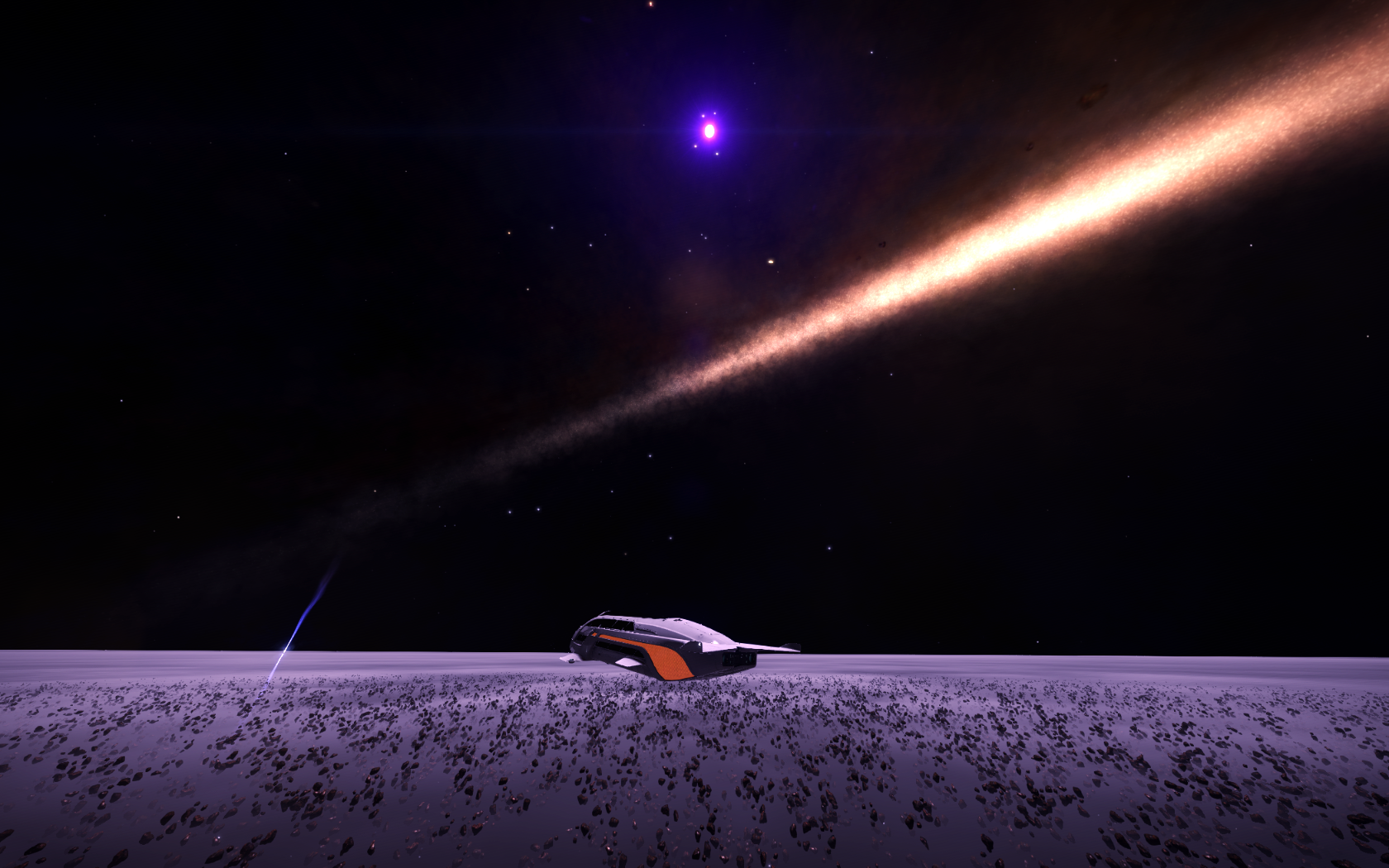 Heaven’s Lathe’s defining feature is the impressive rings around a neutron star. From up-close, they seem to go on forever. 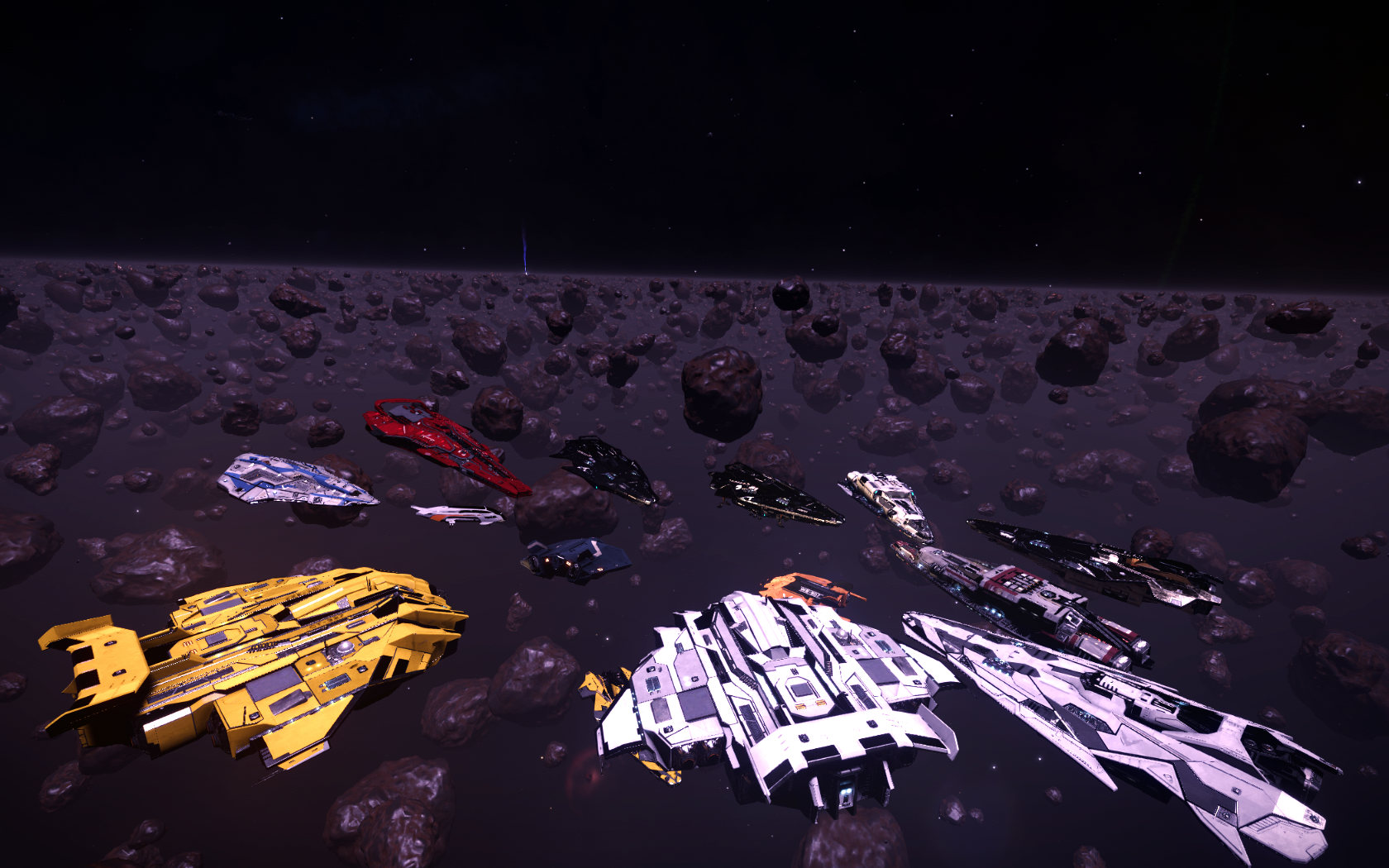 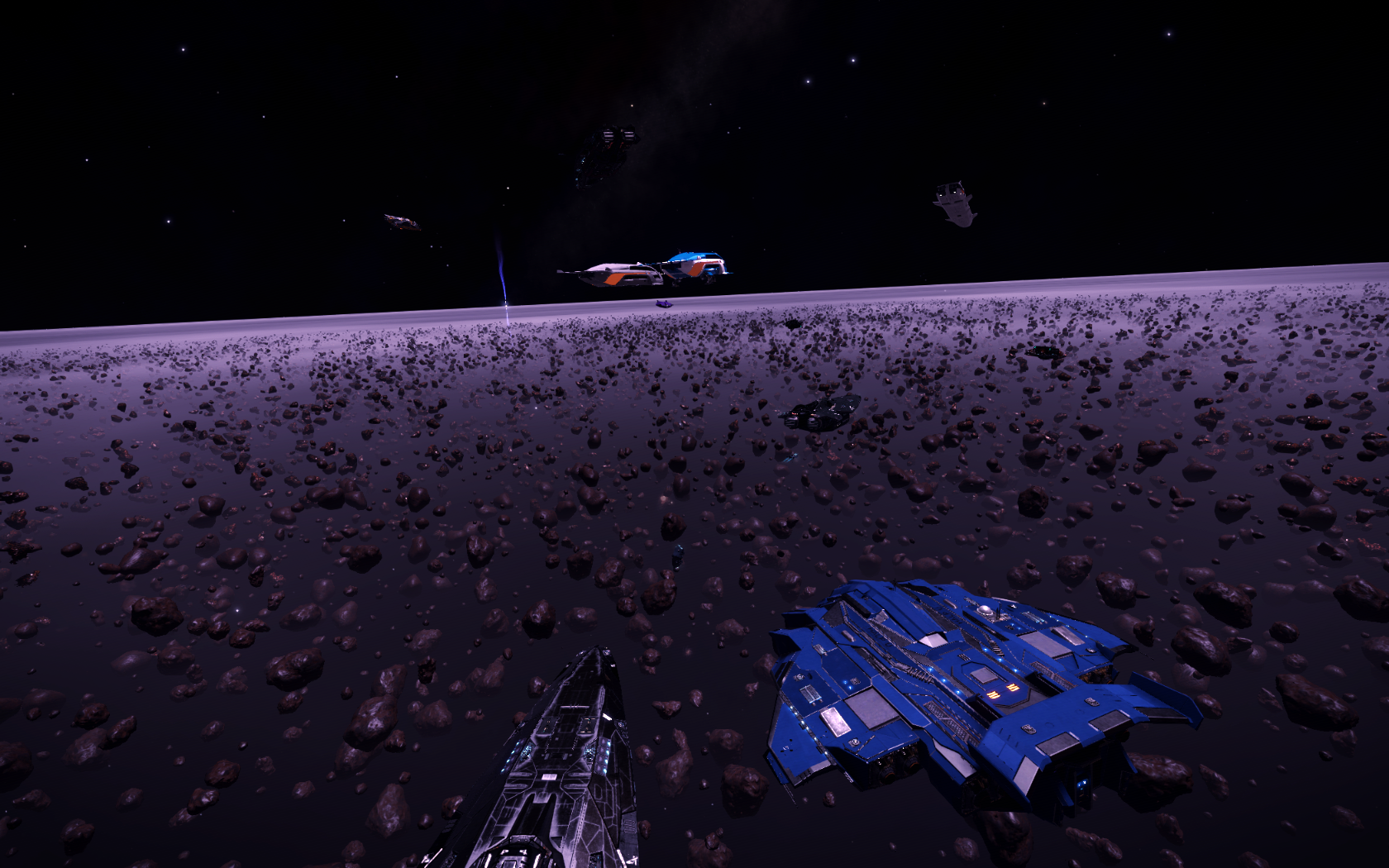 Unsurprisingly, given the lack of surface to land on, no SRV shenanigans were had this time.

The Red Spider Nebula (also catalogued as NGC 6537) is a planetary nebula located some 4,000 light years away from Sol. The nebula has a prominent two-lobed shape, possibly due to a binary companion or magnetic fields and has an ‘S’-shaped symmetry of the lobes the lobes opposite each other appear similar. 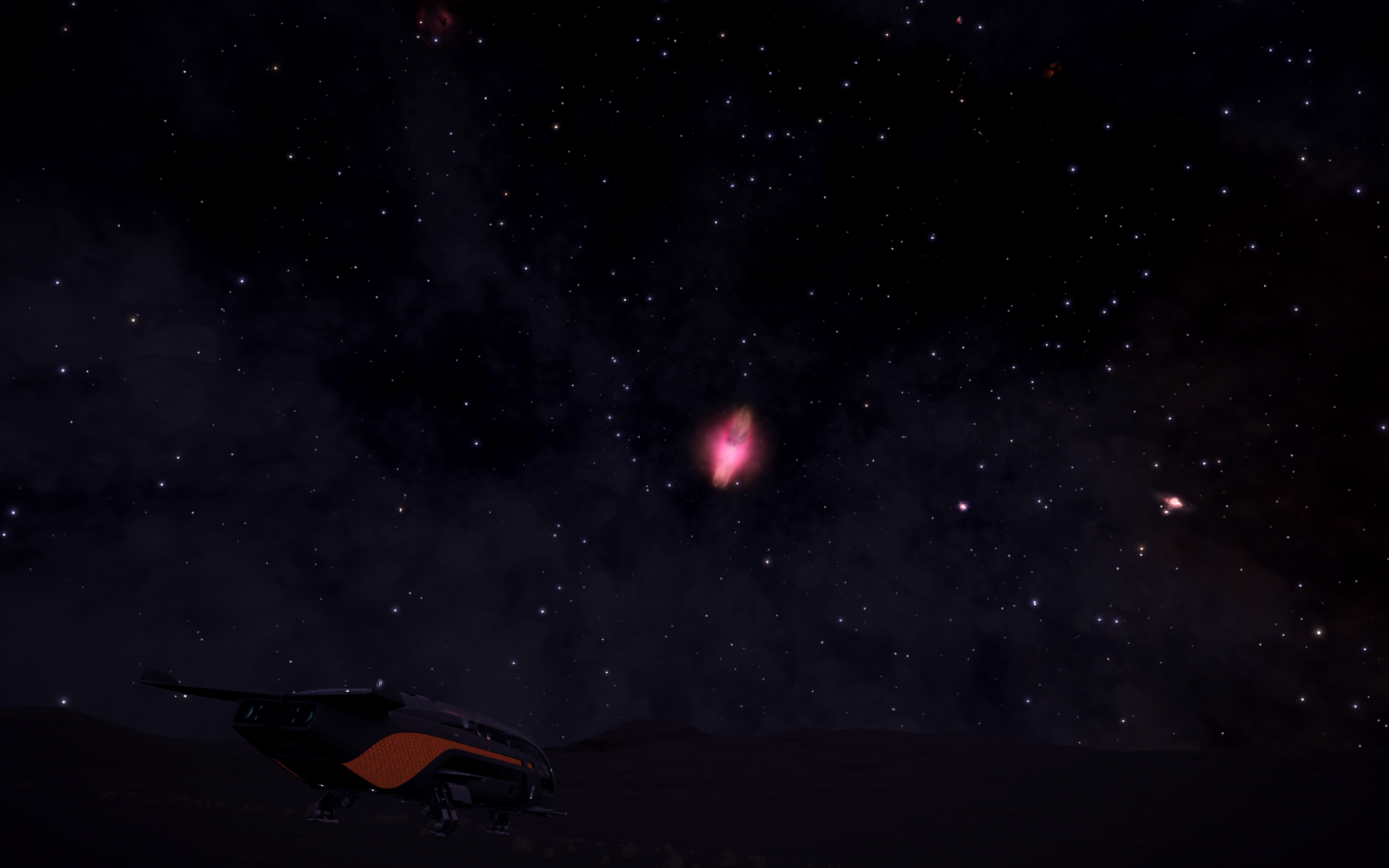 The nebula itself was somewhat distant from the meeting point, but it was nice to have it in the sky above. 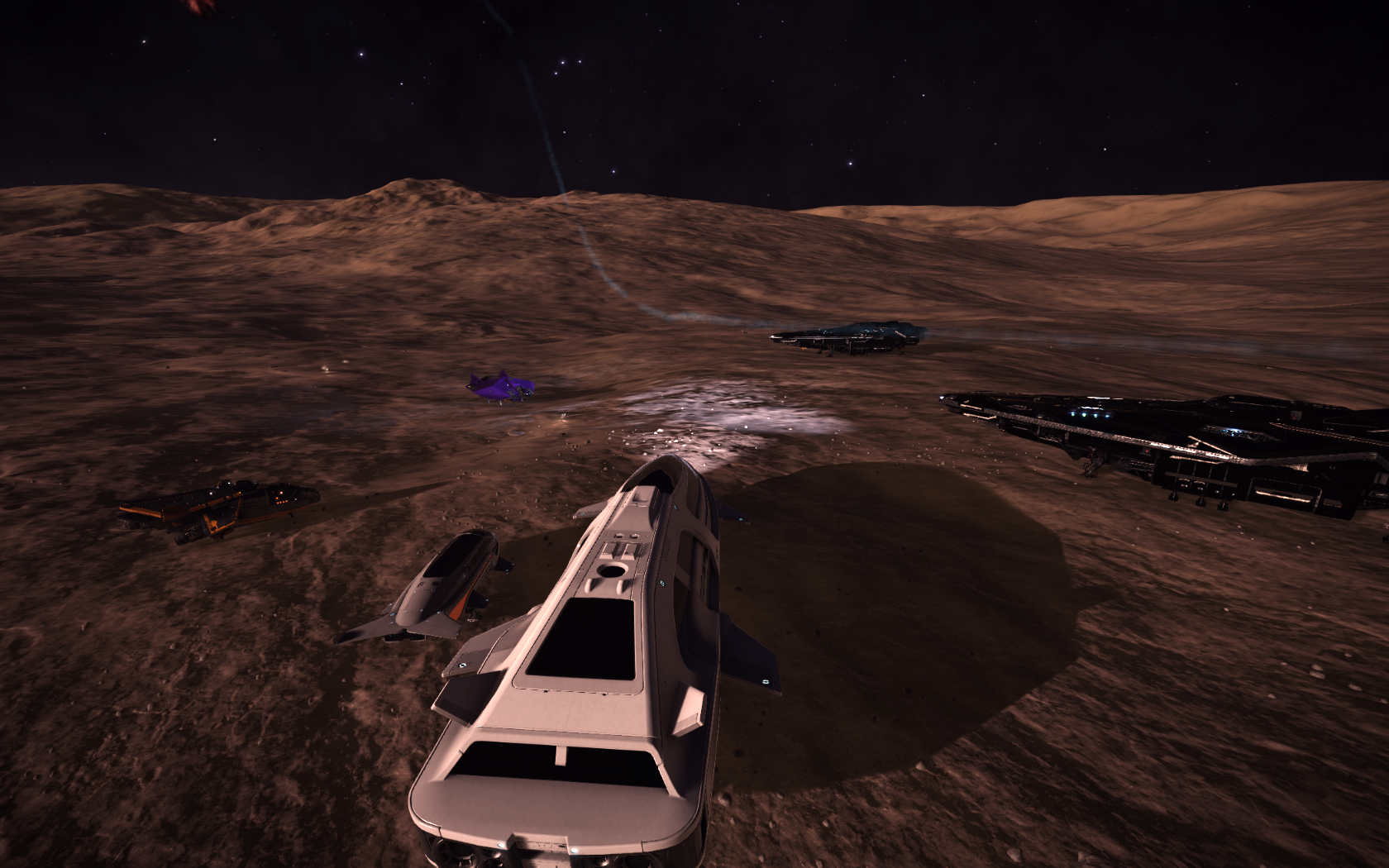 Thor’s Eye is the name given to this system containing a massive O-class star and a black hole. Some cartographers consider it to have been misnamed - the Norse God who lost an eye was Odin (not Thor, unless you go by Marvel). Thor’s Eye is a common waypoint for travelers heading to the Lagoon Nebula, which is just 250 Ly toward the galactic north. Thor’s Eye is situated in the middle of the open cluster NGC 6530, composed mainly of class-A and class-B stars and various stellar remnants (neutron stars and black holes). A blue-white supergiant can also be found nearby (HD 164865).

Somewhat unsurprisingly, a still picture of a black hole doesn’t really show or describe what it does very well. As such, I took a video and set it to some 90s pop-rock, because of course.

The meetup was in the Lagoon Nebula, on a moon of a ringed gas giant, which provided some amazing views. 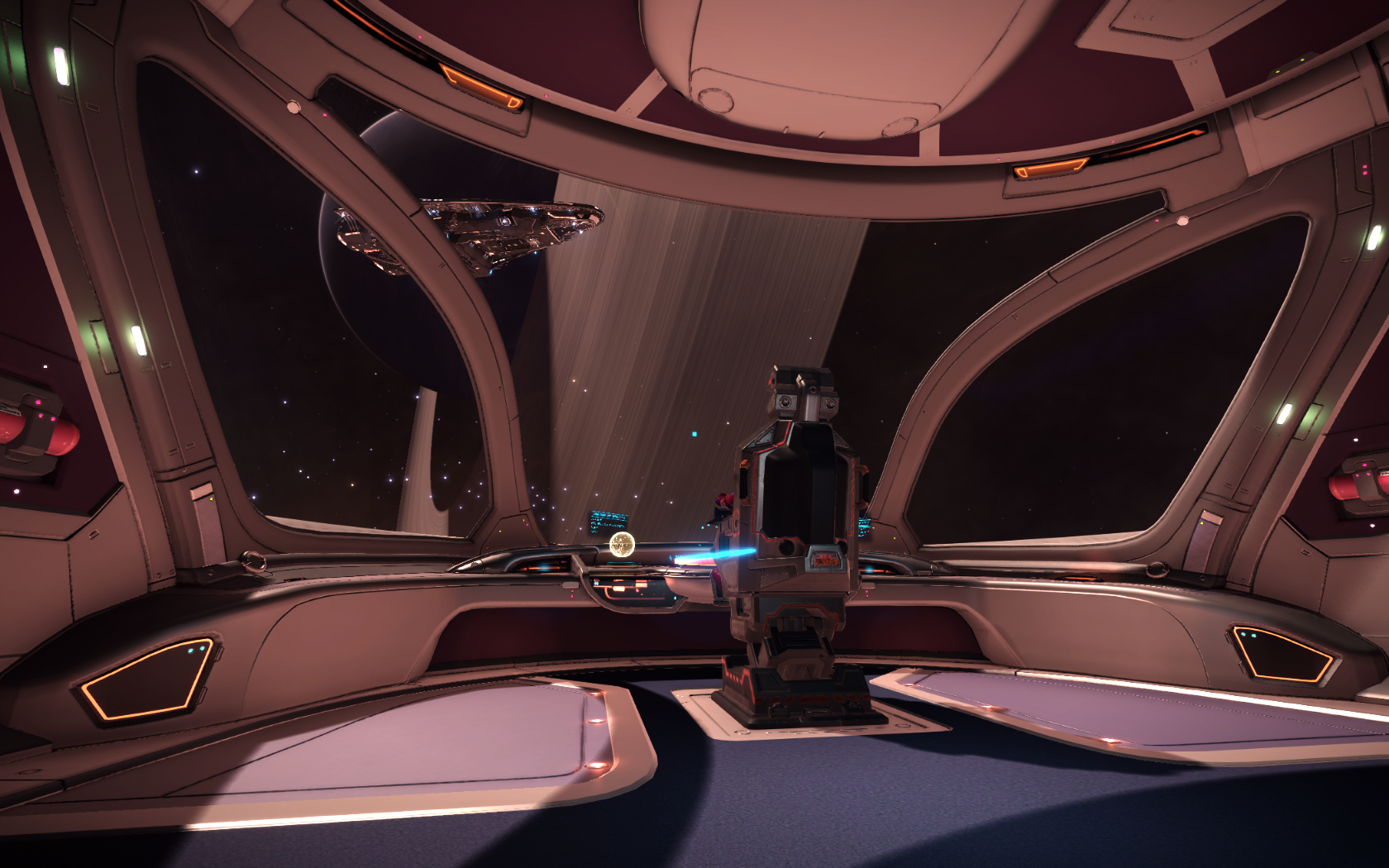 The gas giant hanging in the sky was rather imposing. 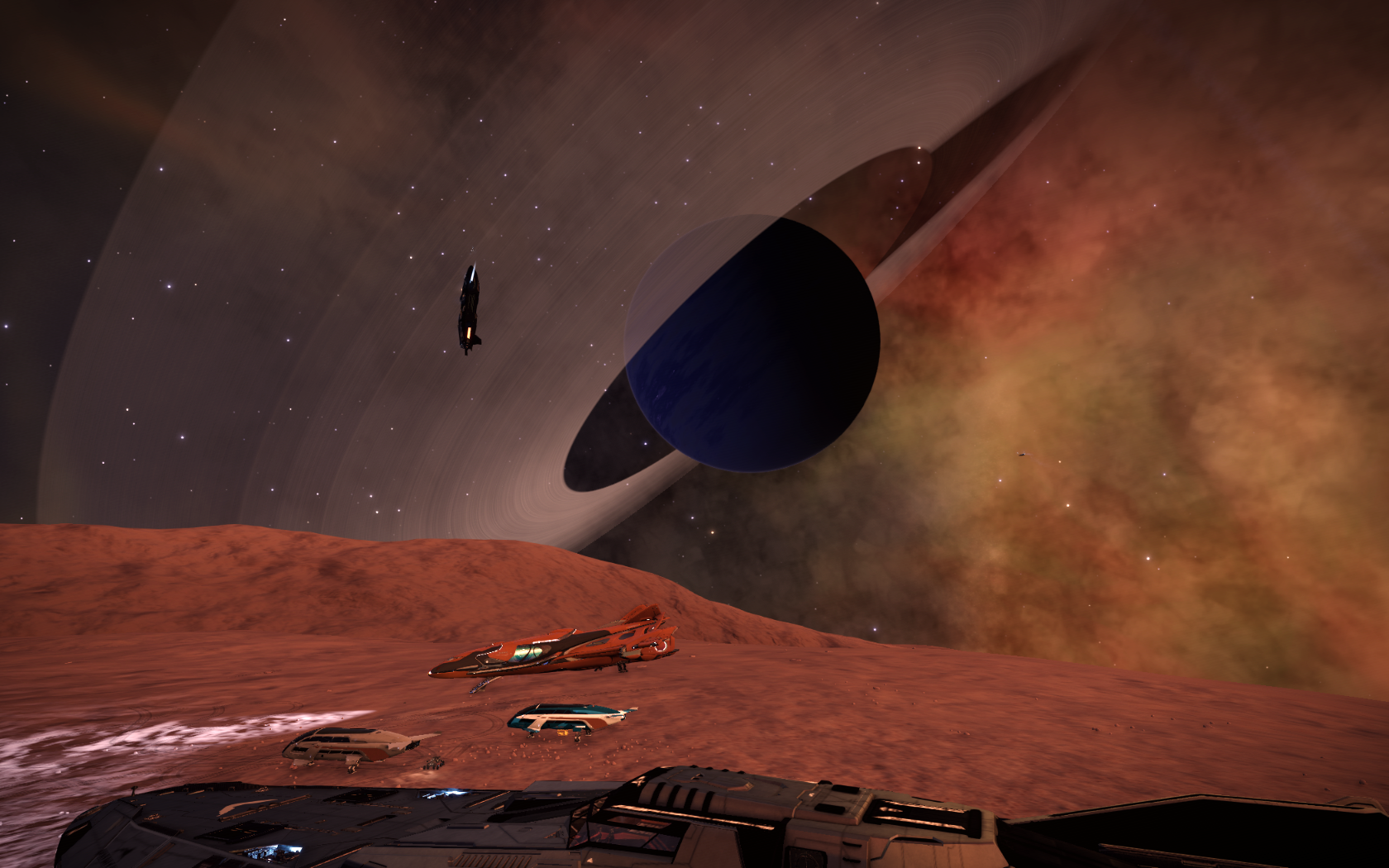 No meetup would be complete without some shenanigans, so instead of SRVs (mostly), we did ship-jenga. 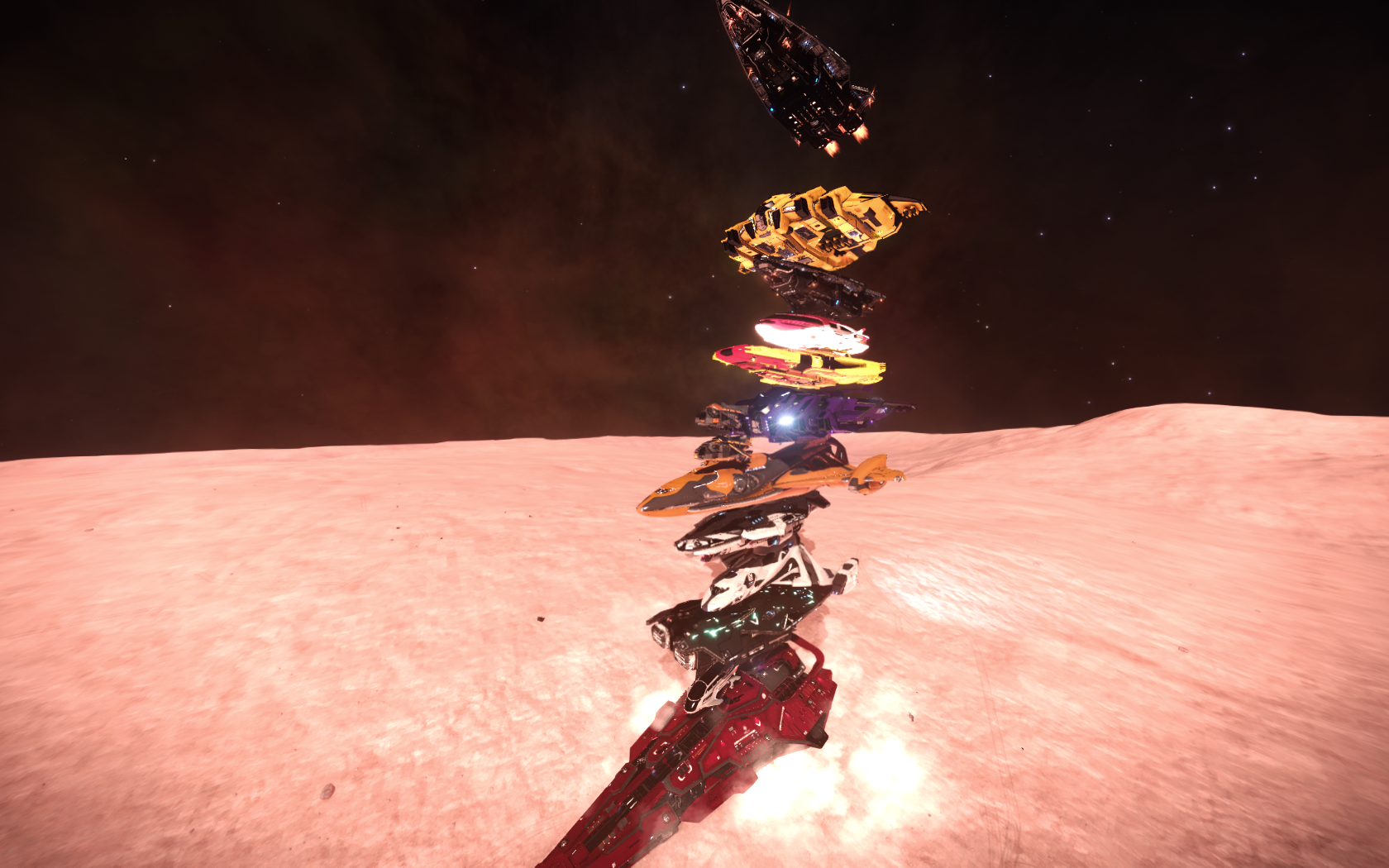 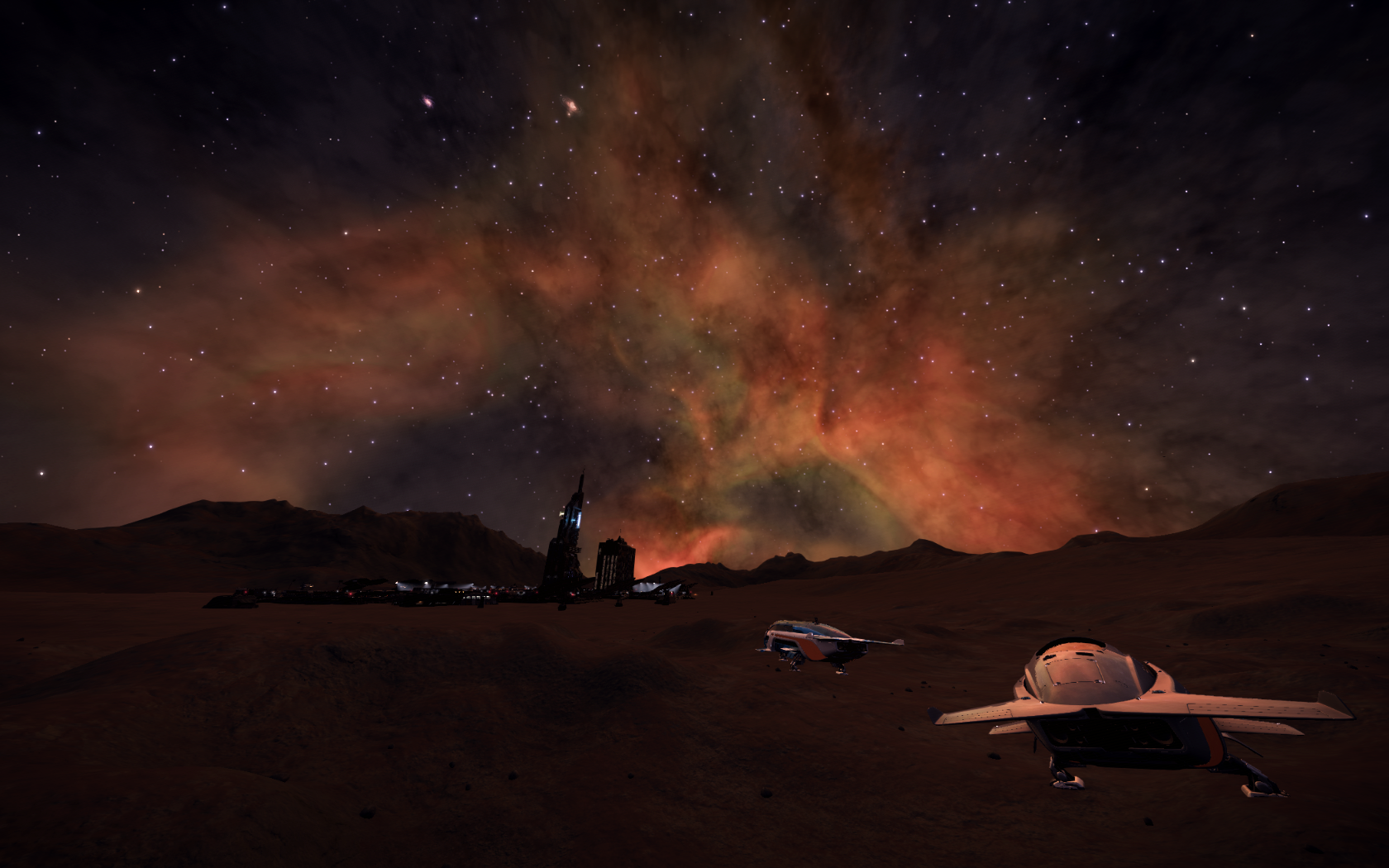 Amundsen Terminal is a fairly standard planetary base, with minimal services, but it has repair and restock so that’s good enough for me. 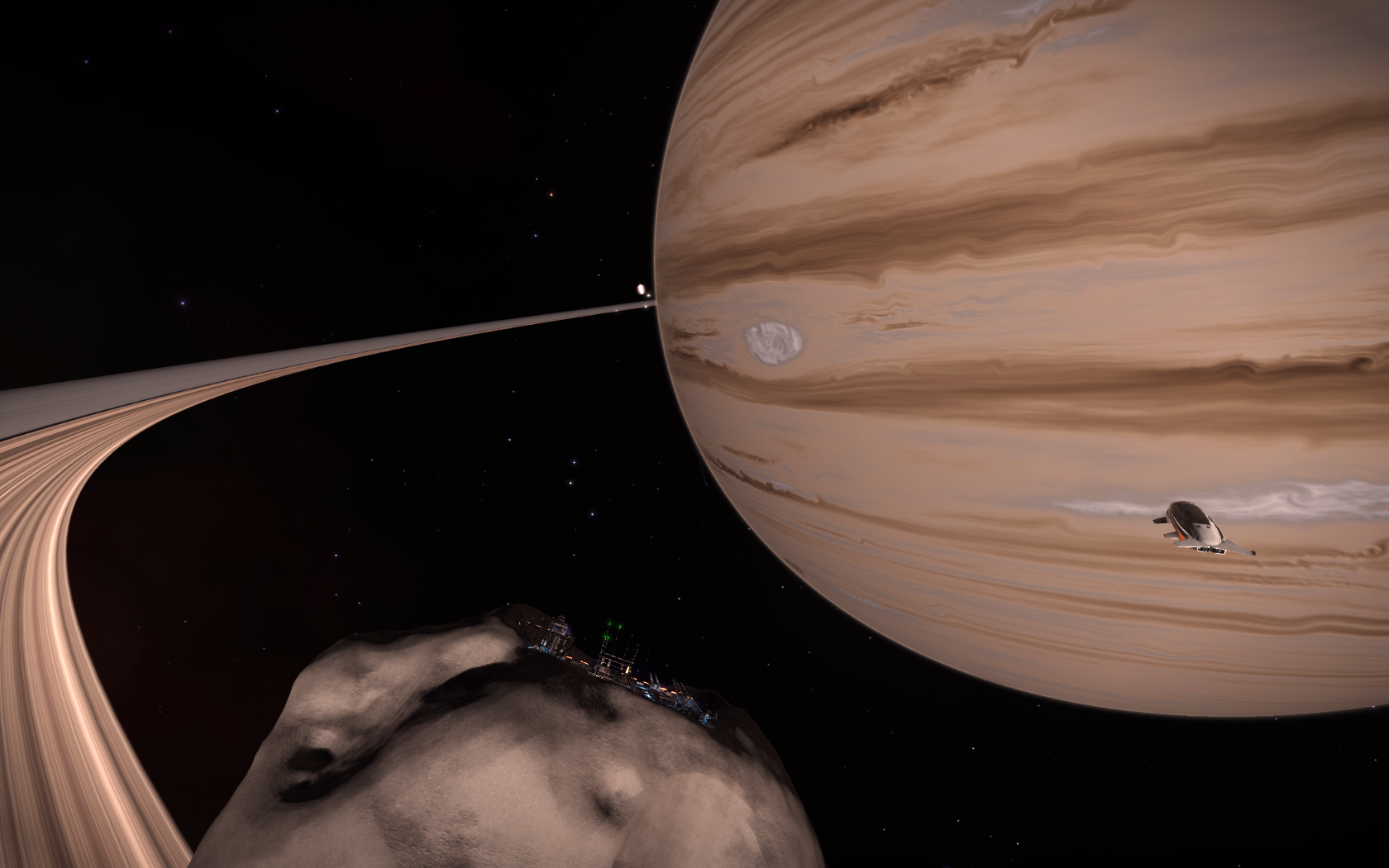 Attenborough’s Watch, on the other hand, is an asteroid base sitting above the rings it came from, apparently there to allow scientists to study the aquatic life in the gas giant below. It’s quite the view.